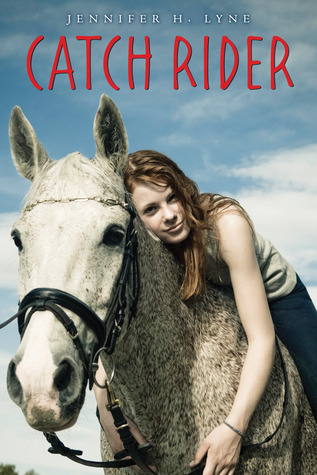 We take a look at a young adult contemporary novel about a girl who dreams of leaving her small town to become a world-class catch rider.

Fourteen-year-old Sidney has been riding horses since she was a toddler in her small Virginia hometown. Her room is decorated with posters of horses in every shape and size and at night she reads Hunter Seat Equitation written by George Morris. Opportunity and fate collide when she is offered a job at Oak Hill, a fancy show barn, with a world class trainer.

This book is yet another iteration of the equestrian tale as old as time … poor girl beats rich, mean girl with drunk codger of a trainer and horse with a heart of gold by her side.

On a basic level, the story is very good albeit incredibly predictable. The author began showing hunters at the age of six and taught when she was older, so the world shown in Catch Rider is realistic … to a certain extent … more on that later.

Unfortunately, Sidney is just not all that likeable as a lead protagonist. I love a solid, fiery female in my fiction, but Sidney came off as borderline arrogant. When discussing George Morris she says, “I knew George would think I was a good rider, because perfection was the last thing I cared about. I was a rider who could ride anything.” She goes on to criticize the riding and teaching styles of several characters compared to her own and her drunken uncle’s superior method.

That passage came at the beginning of the book, so I had hoped the author would allow Sidney to emotionally mature as she progressed through her training, but that just did not happen. I never felt she truly connected with any other character, including the half dozen or so horses she rode throughout the book. Perhaps the author intended it that way, seeing as how Sidney only ever wanted to be a catch rider, but the consequence was a lack of emotional depth.

Which brings me back to why this book is so terribly unrealistic. With one lesson under her belt, Sidney qualifies for the ASPCA Maclay Finals, pitting her against the “Mean Girl” of the story, Kelly. I won’t give any spoilers, but the ending is very reminiscent of the 1985 eventing film we all know and love, Sylvester. In fact, a good deal of the characters and plot points could have been ripped from the same movie.

Overall, I thought this was an easy and fast read. For me, the depressed Virginian mill town was the star character.

It was quiet, green, and cool. When a storm was coming, you could see the dark clouds over the waterfall and feel the cold air come over the Alleghenies.

I give Catch Rider 2 Golden Horseshoes.