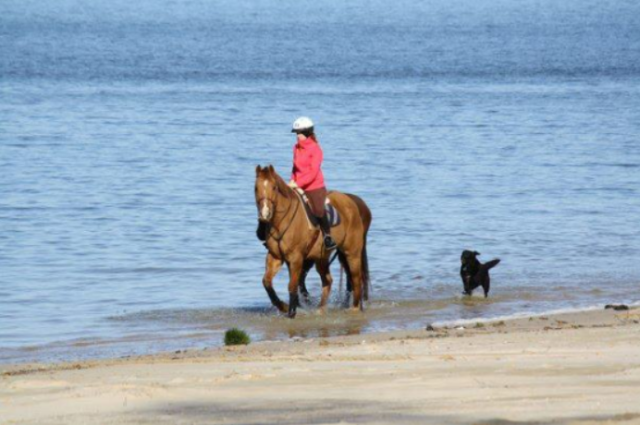 In our newest series, Amanda Uechi Ronan discusses caring for the “senior” horse. This week, she shares the concept of age-adjusted exercise for the senior horse and her Aggie’s individual regimen.

Last week, I discussed the events leading up to Aggie’s official retriement from competition. Trying to keep him fit without a “goal” on the horizon proved difficult at first. Fully intending to trail ride him as much as possible, we soon discovered that neither of us cared much for long-distance trail riding. Long, quiet walks down the road bored us to tears when done more than once a week. We tolerated them better when ponying a Thoroughbred alongside or in a new location, but that wasn’t always possible.

After much experimentation, I discovered Aggie enjoys a basic routine of:

Weather and footing dictate where I work, but I keep him out of the arena as much as possible and avoid circles at all costs. I’m fortunate to have almost 10 acres of sandy loam soil, so most of my training is done on the perimeter of my property. I also have small hills, which keep his topline in shape without repetitive schooling. The quick moment of galloping seems especially important for his mental attitude. It cheers him up if he’s in a grumpy old man mood, even though we can’t sustain the speed for long.

This regimen is specifically geared towards Aggie, but there are huge benefits to exercising any senior.

But seniors have their limits. For one, they need a longer warm up and cool down time. Aggie requires ten minutes in the summer and closer to twenty in the winter when it’s cold and his joints ache. Heat is a problem too, since age can reduce sweat gland function. Studies have also shown that older horses’ hearts work harder to pump blood through blood vessels and skin capillaries than their younger counterparts. If the heat index is high, especially when humidity is off the charts, Aggie doesn’t work at all.

Although exhaustion can be fatal in any horse of any age, it’s especially important not to overwork a senior. Here’s a list of warning signs:

The most important thing my veterinarian told me about Aggie was to “be realistic and listen.” I know that Aggie will never return to full work, but that doesn’t mean he can’t enjoy an occasional Saturday foxhunt. In fact, we have one scheduled for this weekend. The important thing is that I pay attention to what he’s telling me. If an exercise hurts him, I notice and I don’t do that again. If an exercise seems enjoyable to him, I try and allow him that activity as much as possible. Liniment and peppermints go a long way too. Both can be applied liberally.

Stay tuned next week, when we’ll discuss the dreaded metabolic problems that come with old age.