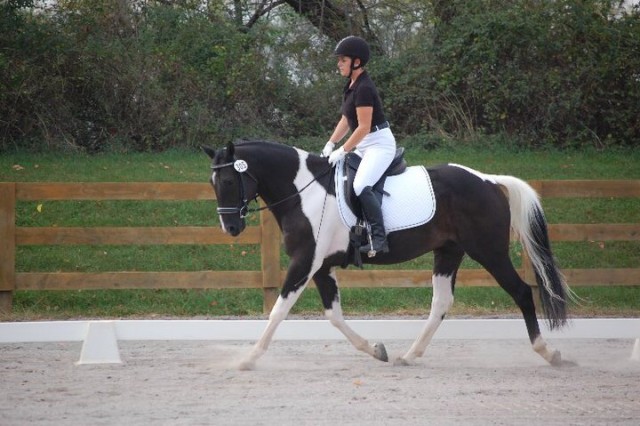 There is no bond like that of a rider and their horse: you are on a 1,000 pound animal that at any point in time can choose to live by its own free will. In 2008 when I started looking for a horse, I set out to find something that I could play around with, trail ride, and possibly show in some local shows for fun. I had no idea at that time what an up and down relationship this would turn out to be.

I shopped for color — I will admit it. I was immediately drawn to this gorgeous black and white creature. Tonka would be nothing special to many people: he is a 17 year old black and white paint. His bloodlines are nothing spectacular. He was a stud until he was six, broke at seven and has four transfers of ownership on his papers in three years. He failed his pre-purchase. I still took him. I had horses when I was younger, but this horse was the first thing that I bought with MY OWN MONEY! I think that is what set this up to be such a monumental thing in my life.

It took some time to figure each other out, but fast forward a year of lots of riding, some shows, a couple of English Pleasure Championship ribbons, and my first taste of the jumper ring: in the late fall of 2009, Tonka came out of his stall lame. No big deal; I treated it as an abscess. After two weeks of soaking and wrapping and no difference, the vet’s concerns grew. He came out and blocked the foot and took x-rays, which did not have good results.

Tonka was referred to the clinic for a full lameness evaluation and MRI, the results of which were career-ending: Tonka had a cyst in his navicular bone which had burst, essentially rendering it fractured. Due to the severity of the injury, his prognosis was not good: if he was having a good day, I would be able to get on him and walk him around. Nerving this horse was not an option in my mind.

But to everyone’s amazement, with proper management and shoeing, Tonka was sound! After reevaluating our goals, jumping was no longer as possibility because of the risk of tearing adhesions and rendering him crippled — so we began our dressage career. I got my horse back! I began to look at each ride as a blessing and one more than we were supposed to have together. About this time, I went through a divorce, I spent hours crying into Tonka’s mane and just sitting in his stall with him.

Fast forward again to April 2016’s spring shots: the vet came out for the Coggins tests and rabies vaccines, coinciding with the dentist’s visit in case drugs were needed. Everything went off without a hitch, or so we thought.

The next day, Tonka would not come to the front of his stall which was not like him. His temperature was slightly elevated, so I called the vet, who assured me that it was a vaccine reaction and we treated is as such. After a visit from the vet, we though we were on the upside.

The next day his temperature began to rise and a large swelling quickly developed and grew on his neck; Tonka’s temperature continued to rise. My mind was racing with the possibilities of what was wrong with him as Tonka was referred to the clinic. By the time we arrived, his neck had swollen more and he was noticeably more uncomfortable. An ultrasound confirmed that Tonka had Clostridial myositis as a result of a vaccine. The only option was to lance open the orange sized gas pocket.

I left the clinic with a heavy heart and the thought that I may not be bringing Tonka home with me again: his prognosis was 50/50. The next morning, they had to lance open another gas pocket — but three days later, we had finally turned a corner and Tonka was going to make it! I was able to take him out for a walk and I cried: I had thought that I would never be able to walk him anywhere again. Tonka remained in the clinic until the following week, and was finally released.

38 days after going into the clinic with a potential death sentence, Tonka walked back into the dressage ring. After just 10 days of riding him again and 30 days of rehab, he walked out with two blue ribbons, and scores of 73 and 70%!

Tonka is my miracle horse. He has gotten me through so much in 10 years. Cherish what you have because you never know when you are going to lose it.

About Taryn: I am a high school veterinary science teacher and avid equestrian. I have been riding for over 20 years. I currently compete in eventing, dressage ,and show jumping and also enjoy training and showing dogs.

Is it “Your Turn”? We love publishing reader essays — send yours to [email protected]!