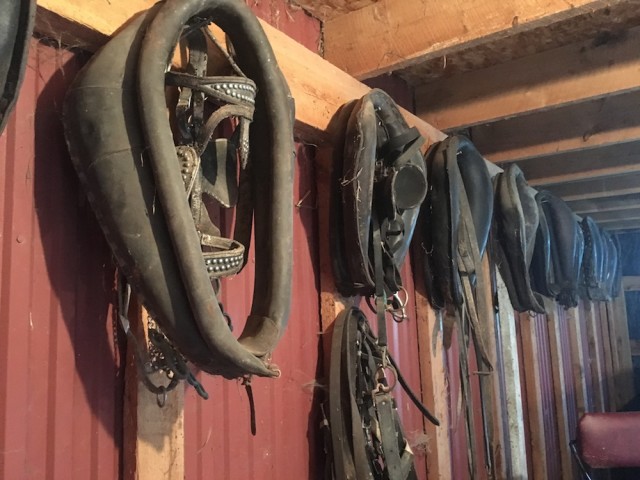 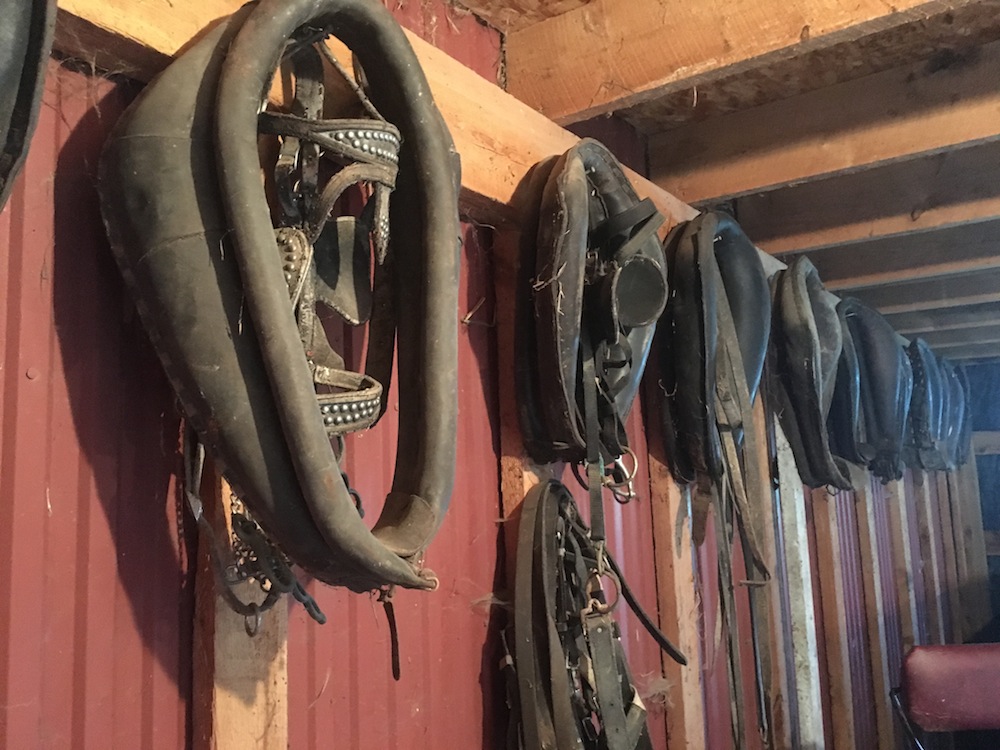 Old collars and bridles still hang in the barn. Photo by Kristen Kovatch.

The last time this barn floor echoed with the footfalls of working horses was at least fifteen years ago, by my husband’s estimate; that was the last time my grandfather-in-law had a team of working Haflingers that he still hooked regularly for the odd job on the farm. For decades he had bred and raised Haflingers for farm work — he still used a tractor for the big jobs, but the Haflingers were his particular pride, whether he was driving them around the neighborhood to call on other farmer friends or plowing a few acres or spreading manure from the cow barn.

And then silence — the barn stood devoid of workhorses, the tie stalls and their mangers empty.

Early in the summer, the workhorses returned at last: not the Haflingers of the past but a pair of wayward full draft horses, the Belgians Rocky and Randy that I adopted to give a forever home. True, the barn designed for cobs was a bit small for them (when standing alert their heads are only just below the ceiling) and the harness on the walls didn’t fit — but once again, the little barn echoes with the thunderous sounds of iron-shod workhorse hooves. I like to think perhaps the barn itself remembers, the wooden beams curving around us like an embrace.

But why do we bother to bring the team in, fit their harness to them, hook them together and then put them to the spreader or the forecart when we have plenty of tools like tractors or ATVs or trucks to do all the same job and in a quarter of the time? Why do we need to put the horses to work at all?

Driving the workhorse — the true farm-bred draft, as opposed to his fancy-stepping showier draft cousins — is truly a labor of love. There is no show-ring reward, no judge to impress or ribbons to chase or time to beat or goals to set. It’s only a driver and his or her team and a job to be done.

Work itself becomes the performance: there’s a beauty even in the simplest, most mundane jobs, like pulling the drag harrow over the pasture or spreading a load of manure on a fallow field. For me, driving the team is a reminder that work doesn’t always have to be about view counts, social reach or number of shares; it doesn’t always have to be about the day’s profits or expenses, efficiency of tasks performed or counting the minutes until the end of the shift. The joys of the job itself thanks to the strength of my horses is all the reward I need.

In a world focused on the reward, workhorses remind us that there can be beauty and art in the work itself. Long live workhorses.