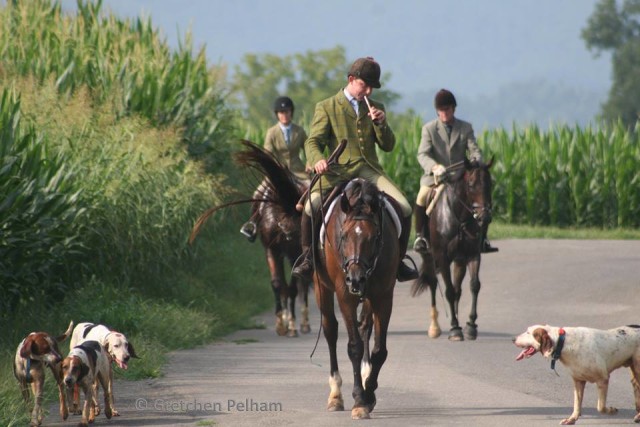 All photos by Gretchen Pelham.

To clarify, I am NOT a morning person. I’m fortunate that I have a day job that lets me keep banker hours — not the bank office hours but the hour that the actual bankers arrive in the office. I hate my alarm, even if I want to go do something that requires that early start. Also, I should mention I can’t drink caffeine.

Checklist for the first day of Tennessee Valley Hunt’s season:

1.  Went to bed wearing my riding breeches and hunt shirt (because I will be getting up at such a terrible hour that the idea of doing buttons will be beyond my feeble brain).

2. Alarm goes off at 2:15 AM: blaring tuba blasts. The cat hissed at me after I growled/snapped/slashed at her when I fell out of bed trying to smash the alarm into oblivion. Now the screen is cracked but the ALARM TUBAS ARE STILL BLARING.

3. Pony saddled and loaded in the trailer and on the interstate by 3:30 AM: All done without a single drop of caffeine or any murdering of innocent bystanders.

4. Arrive at the kennels at 5:00 AM without any road rage mishaps, mainly because no one else is awake. Help load 18 couple of Penn-Marydel Foxhounds (that’s 36 dogs) into the hound trailer.

5. Arrive at the hunt fixture at 6:05A M and then wait for the daylight to show up. The fixture is on the Nolichucky River — which translates to the River of Death. I don’t think this is a good omen.

6. Mount up just before the hounds are unboxed at 6:25 AM. Ahhhh, swinging your leg over and sitting down in the saddle is like snuggling in your comfiest chair: I’m starting to feel a bit human. A ghost of a smile might have just cracked the murderous veneer on my face. It looks like it might be a pretty morning.

8.  The hounds are in full cry by 8:00 AM and my horse is perfect. There is nothing like riding your best hunt horse knowing that he will read the slightest of signals you give him without any argument, bucking or bolting. (Well, he did bolt last season but we will choose to forget that episode.)

9. Watch the sun burn the fog off the corn at 9:00A M while being serenaded by the best sounding foxhound pack on the continent and feel so lucky to witness it. I actually feel happy that I got up so early. Yep! I vow to never be angry again when I get up early for hunting …

Ok, ok. After years of hunting I still hold out hope that this will become true. But I admit that the only way I will ever be happy to awake predawn is if I finally manage to kidnap — er, I mean convince Boyd Martin to come hunt with us. THAT morning, I assure you, I will be ecstatic to wake up! Oh Boy(d)!

10. Collect the hounds at 9:45 AM, thank your huntsman and staff members and untack your pony, the bestest hunt pony ever! We had a cracking run on one coyote for over an hour and forty minutes! Wahoo! Who could ever grumble about a silly thing like getting up early?

11. Load your pony up for the haul home and smile the whole drive back because you are so happy that hunt season has started!