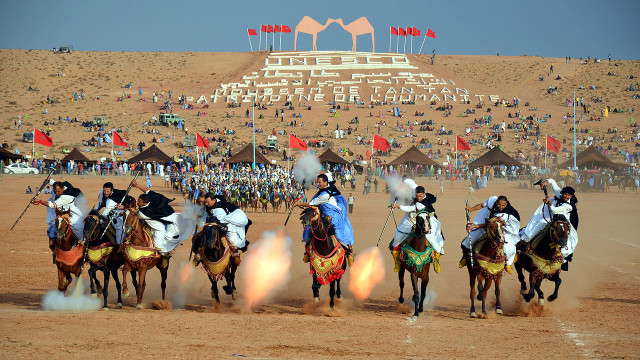 The Moroccan art of fantasia, or lab Al baroud (which translates to “the gunpowder play”), has long been a traditional act performed at festivals, celebrations and major events such as grand weddings. One of the first Europeans to observe the event, Eugene Delacroix, mistakenly believed he was observing military exercises, and one might understand his confusion: a line of riders charges in unison across a few hundred meters of open ground, then fires gunpowder muskets simultaneously. It’s fast, it’s dangerous and it’s a key symbol of the bond between horse and rider in the Moroccan tradition (while being derived from military maneuvers in history).

There’s plenty of pageantry involved as well: each troupe or team dresses in traditional garb, including beautiful and ornate tack and decorations on the horses themselves — finely-bred native Barbs, Arabians or Andalusians. Each fantasia opens with a parade of troupes with traditional music and drums, and then each team takes to the field.

In competition, each team is judged on its synchronicity, especially with the firing of the muskets — it should sound like a single shot despite the whole team firing at once.

Traditionally, fantasia was a display in which women could not participate due to Morocco’s heavily patriarchal culture. However, in recent years, more all-women troupes are competing — and winning.

Competitions are typically paired with major festivals across Morocco and have become a tourist attraction as well. Some stylized fantasia is performed regularly in tourist hotspots. The traditional fantasia is also performed strictly as an exhibition. It’s estimated that across Morocco there are over a thousand regular fantasia participants training hard to keep this tradition alive and well.

We love celebrating horse culture all over the world: go fantasia, and go riding.