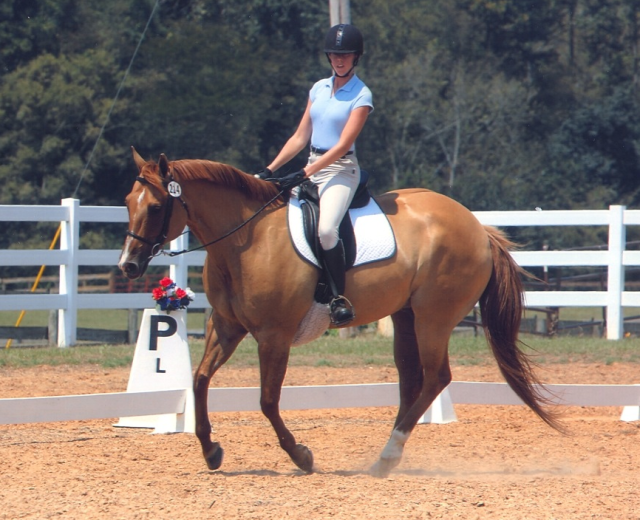 In our newest series, Amanda Uechi Ronan discusses caring for the “senior” horse. In the inaugural column, Amanda introduces us to her senior and the first big hurdle of aging: arthritis.

At 23-years-young Aggie has been forced to slow down. We don’t compete anymore, but we do head out on the trails two or three times a week and even attend the occasional foxhunt or competitive trail ride. Most people are shocked to discover he’s technically labeled “senior,” which is generally the term used for any horse over the age of 15 by veterinarian textbooks, probably because he’s still as much an alpha boss as he ever was and he loves to work.

The last few years he has looked and felt really good, but that wasn’t always the case. Around 2004, his health started declining. I think a good part of that can be blamed on the fact we were at college during that period and he never adjusted to the communal lifestyle. I’d always kept him at home before then and since graduating and moving back to a private property he’s been much happier.

But there were also some pretty major physical and mental shifts that needed to be addressed.

When a horse is younger than two-years-old, tissue growth is greater than tissue breakdown or cell death. It’s called an anabolic state. From two to fifteen, the tissue replacement is roughly equal to tissue breakdown. After fifteen, the general trend is overall tissue breakdown. This is called a catabolic state. It affects all tissue in the musculoskeletal system including joints and is most accelerated by a decrease in the horse’s ability to digest nutrients and thyroid and pituitary gland dysfunction.

The general warning signs are:

In Aggie’s case, in 2006, we had all three warning signs appear at once. Most problematic was his resistance to perform, which had never been the case with him. This horse loves to work and compete, so when he started showing signs of resistance — I vividly remember him walking away from me when I came to halter him up several days in a row — I knew something was very, very wrong. We immediately took him to the vet and performed a lameness exam that included a full set of digital x-rays. Digital radiographs were the latest and greatest ten years ago and I was very lucky my vet had the technology. You’re awesome, Dr. Thoni!

Left Hock versus Right Hock — Notice how the left has very little to no space showing between the bones.

The diagnosis was “Degenerative Joint Disease,” which, as a note to vets everywhere, sounds hellishly more frightening than arthritis. Aggie had DJD in his hocks, stifles, sacroiliac (a.k.a. hunter’s bump), and ever so slightly in his front ankles. It was mild, but everywhere.

There are a plethora of options for treating joint pain, but I trusted my veterinarian when he said Aggie needed joint injections. The exact formula is lost to the sands of time, but I know that it contained corticosteroids as well as hyaluronic acid. Oral supplements were discussed, but, at the time, joint supplements were underpowered and overpriced. Remember the dark times before SmartPak? Aggie is also a very picky eater.

Between May 22, 2006 and April 28, 2008, Aggie received eight rounds of diagnostic radiographs and joint injections in different areas of his body, primarily the hocks and stifles. During that same time he visited a licensed equine chiropractor once a month every month. The rest of Aggie’s recovery plan was simple: stretch and exercise. He received three full days of rest after the injections, but then movement was a priority.

There was one giant caveat, though. He needed to be exercised in a very specific way. The vet suggested Aggie perform little to no repetitive maneuvers, little to no circling, and as much long, slow hill work as possible. Those restrictions weren’t exactly conducive to a horse that specialized in dressage and equitation-style events, a horse that could canter a 20-meter circle with laser precision accuracy in his heyday. But, towards the end of 2007, the vet finally said something that I’ll never forget. He said, “You can either continue to compete this horse for maybe two or three years with regular injections or you can retire and trail ride him for ten to fifteen plus.”

Though I fought the decision at first, Aggie was officially retired in the winter of 2007. His last year in competition, we won the year-end Adult All-Around Championship in a local show series as well as two blue ribbons at the annual K9 Benefit Show hosted by Holly Hill Farm in Louisiana.

I honestly think the change was harder on Aggie. Those of you who own similar personalities will understand, but it’s difficult to describe a horse who honestly enjoys and really, truly looks forward to seeing new places and competing every weekend.

Stay tuned next week, when I’ll discuss age-adjusted exercise and the mental aspects of learning to slow down.