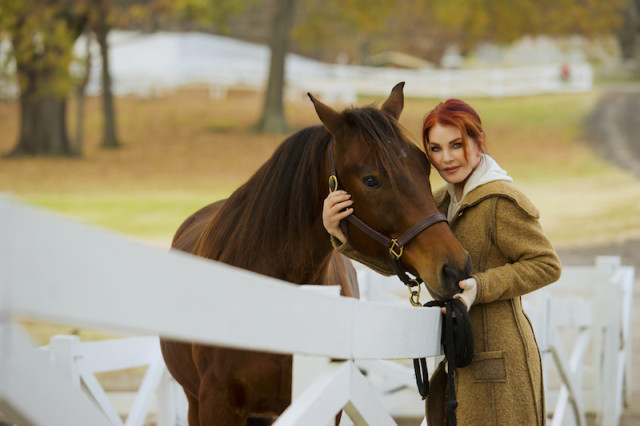 Priscilla Presley was named Humane Horsewoman of the Year by the Humane Society of the United States in 2014. She shares her thoughts on soring in the Tennessee Walking Horse industry in this exclusive essay.

For decades, the cruel practice of horse “soring” has plagued a breed that I hold dear – the Tennessee walking horse.  Violators of the 1970 Horse Protection Act (that was supposed to end soring) have managed to escape detection and continue their heinous treatment of these poor animals, but now the U.S. Department of Agriculture (USDA) has proposed new regulations that would finally crack down on these abusers.  I encourage humane-minded people reading this to please submit comments in support of this rule.

Throughout the years, many horses have called Graceland home: from Domino, a quarter horse Elvis bought for me in 1967, to Rising Sun, Elvis’ famed golden palomino to the ones rescued from abuse or slaughter who still live there today. But it’s Ebony’s Double — the very last horse Elvis owned — and other Tennessee walking horses like him who turned me from a horse lover into an avid horse advocate.

Elvis purchased Ebony’s Double from a well-known breeder and owner in middle Tennessee, and called to tell me how he was immediately taken with the horse’s beauty and grace. At that time, Elvis and I didn’t know what went on behind the scenes in the Tennessee walking horse show world. We had witnessed horses performing the exaggerated, high-stepping “big lick” gait, and naively believed it was the way the horses naturally moved. Although Ebony’s Double never competed, a special retirement ceremony was held for him at the industry’s biggest event, the Tennessee Walking Horse National Celebration in 1983. I presented a trophy on behalf of Graceland.

But years later I saw the news of undercover investigations of top winning trainers like Jackie McConnell that exposed the despicable form of cruelty to horses known as “soring.” To achieve the big lick, trainers use caustic chemicals to burn the horses’ legs and then attach chains that bang against the aggravated tissue, to intensify the pain. The horses are forced 24/7 to wear heavy, tall platform shoes, or “stacks” under which hard, sharp objects have been inserted to hurt their tender soles. I’ve also seen video of a horse being “stewarded” — beaten for flinching in pain during a mock inspection of his legs, to teach him not to react to pain during a real inspection.  Honestly, I couldn’t watch the rest.

Needless to say, I was shocked by the barbaric techniques used, heartbroken and saddened to learn such torture and cruelty existed in this world of horse competition. The problem remains rampant among the big lick faction and in fact, rather than comply with the law, trainers have just invented new ways of inflicting pain on their horses and covering up the abuse. They are motivated solely by accolades, blue ribbons and, of course, money.

Once I learned this, I demanded that the Celebration return the trophy, and I joined the campaign to end soring. These days, I travel around the country and regularly speak out on behalf of the magnificent horses who suffer the constant torment of soring. Just this month I spoke at a meeting held by the USDA in Sacramento to discuss the agency’s proposed new rule to help stop soring.

For years, horse advocates and even the USDA’s own Inspector General have recommended that the agency correct the weaknesses in its enforcement of the Horse Protection Act. Members of Congress introduced federal legislation to do this as well, and the Prevent All Soring Tactics (PAST) Act has gained unprecedented bi-partisan support. I traveled to Washington, D.C., to meet with legislators and voice my support for this bill. Unfortunately, a few well-placed legislators  doing the bidding of campaign contributors among the big lick crowd have kept the bill from coming up for a vote — a vote that would undoubtedly result in its passage.

Aside from the continued use of the torturous devices used to sore these horses, one of the greatest problems is the failed system of industry self-policing. Under existing regulations, industry insiders and others with conflicts of interest are largely responsible for inspecting horses for signs of soring. This has amounted to the fox guarding the henhouse. The USDA proposal would do away with this system, instead having impartial agency-trained and -licensed third party inspectors at every show. The rule would also ban the chains and heavy stacked shoes that are part and parcel of the soring process.

The agency is seeking public comment on its proposal until September 26th. However, those same Congressional obstructionists who’ve blocked the PAST Act have lamentably been joined by Senator Bob Corker in requesting a 60 day extension of the comment period, until November 26. This is a blatant attempt to delay the rule’s implementation, pushing it out into 2017 for the next Administration to consider.

Soring is a stain on the Tennessee walking horse industry and has brought disgrace to the state of Tennessee. The majority of walking horse owners, myself included, are eager to see the day when only sound, healthy horses are celebrated, not the grotesque big lick. Those who oppose USDA’s proposed rule are quite simply protecting horse abusers. The rule contains common sense changes that will go a long way toward finally ending the torment for these horses and reviving the nation’s pride in the breed.