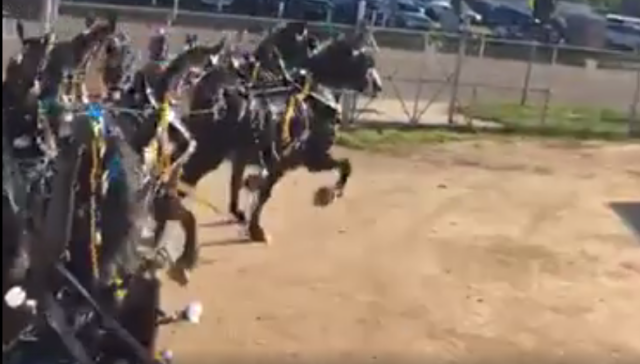 Social media has been a fabulous tool to allow us all a glimpse behind the scenes of different aspects of the horse world that we might perhaps never access otherwise. One of my favorite equestrian figures to follow is the Blue Ribbon Days Percherons, a championship-winning team of top-notch draft mares from Indiana: not only does the Blue Ribbon Days team provide plenty of updates from their busy show season all over the country, but the team also makes great use of the Live feature on Facebook to let fans from all over the world watch each class as it develops.

While the show itself is a lot of fun to watch, I’m loving this look at the route to the show ring itself at the Minnesota State Fair: Blue Ribbon Days originally streamed this video live, but even a few days later we can sit from the driver’s perspective and get an idea of the amazing relationship between horses and driver — it’s certainly no simple feat to manage eight ready-to-show draft horses en route to the coliseum, but this driver makes it look easy!

What a treat it must have been to witness this hitch in person. The judge must have agreed as well, because Blue Ribbon Days won the eight-horse hitch class!