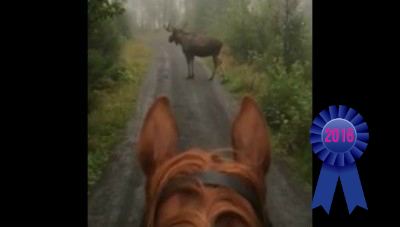 Horse vs. moose in a fight? Our recommendation is never find out who’d win that battle.

Lena Myrseth of Bærums Jernvaerk, Norway was trail riding on her chestnut mare near her home when she encountered what she referred to as “the king of the forest.” An apt name for a moose with one of the most impressive racks we’ve ever seen. He was stopped dead on the path that Lena was trying to cross, and for a long period, looks like he’s not going to budge at all.

When he does finally move, it’s in the wrong direction, and both Lena and the horse are clearly trying to keep their cool. When he starts moving toward them, Lena allows her mare to follow her instincts to turn and run. Which it turns out is exactly the right thing to do.

According this interview with Lee Kantar, state deer and moose biologist with the Maine Department of Inland Fisheries and Wildlife, a moose will usually react to a person or animal being up in its grill in two ways: Either it will walk away to avoid you, or it will aggressively assist you in leaving its territory. You definitely want to avoid the latter.

If a moose charges you on horseback, you do not want to stand your ground (not that your horse would likely let you, but don’t bother having that fight.) A moose will not back down from a charge, and a collision is the equivalent of a car vs. a semi. They are also unlikely to be scared off by sounds or gestures like some other wildlife. Your best bet is to gallop away or if left with no other choice, try to seek a barrier like a boulder or large tree. Though we suspect that idea may be a bit harder to explain to your horse!

According to Lena, the moose did not follow them long, just a few steps sufficient to suggest it would come further if necessary. We’re glad Lena and her mare are alright (and that she safely got it all on camera!)

Be safe out there, kiddos, and go riding!