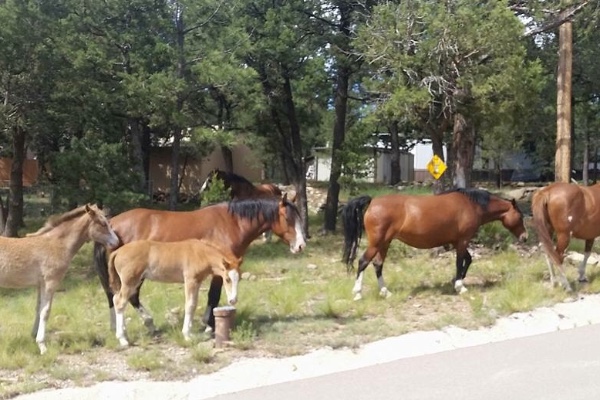 Update: The horses will be returned to the Alto area.

While the debate over what to do with the wild horses living on public land under the Bureau of Land Management (BLM) often occupies the headlines, there are countless numbers of free-roaming horses living on other lands all over the American West — and one such small herd has been removed from its historical range as of Saturday, August 27.

A small herd of “about a dozen” mares and foals was contained and then removed from the Alto area of New Mexico after property owner Caroline McCoy lodged a complaint that the horses were a nuisance, posed a hazard to public roadways and were damaging property. Following requirements from the livestock board, McCoy and her property neighbor managed to corral the mares and foals; the horses were then removed to an undisclosed location. Reportedly, the herd was damaging McCoy’s property as well as her neighbor’s; the herd had damaged fencelines intended to keep them out and their presence had distressed McCoy’s own horses to the point of injury.

In New Mexico, free-roaming horses are not protected under the same laws guiding the treatment of mustangs and burros roaming on BLM territory — “wild” horses are assumed to be strays with the assumption that they wandered off the Mescalero Apache Reservation 20 to 30 years ago. The seized horses from Alto will be held for five days, inspected for microchips and brands, and examined by a state veterinarian. During this time, any owner with proof of ownership may come forward to claim the horses. After this five-day period the horses will be available for auction under the lost/estray section of the livestock board’s website.

This situation is obviously a bit of a catch-22: the Alto horses are said to be wild, so there will not be any owner with proof of ownership to come forward. At the same time, they’re not protected under Wild Horse Protection Act governing animals on BLM territory, but said to be descended from recently-escaped livestock.

Community residents around Alto are working hard to protect what they view as “their” wild horses. A GoFundMe account has been set up to raise $25,000 to buy back the horses, pay for feed and eventually return them to what is described as “their rightful home.”

According to the Facebook group Bring Ruidoso’s Horses Back, the same lawyer that saved the Placitas herd of New Mexico from a similar fate has agreed to litigate this case as well, fighting to have the Alto horses deemed wild and therefore protected. This Facebook group is also striving to put to rest swirling rumors, such as that the horses were already moving through auction (they are still reportedly being held in Santa Fe).

Also among the Bring Ruidoso’s Horses Back Facebook page are photos of the horses eating out of local residents’ hands, eating hay set out for them and letting local residents pet them and even pose for selfies. However, McCoy stated that when she and her neighbor worked to corral the wild horses, they demonstrated that they “are not gentle by any means.”

Update Tuesday August 30, 3:10 PM: The Alto horses will be returned to the area: The New Mexico Livestock Board has agreed to return the horses to their wild state. The lawsuit to have the horses declared “wild” was filed on Monday and is still developing.

[WHOA! Wild horses of Alto – Save the herd!]

[Save our Alto wild horses]