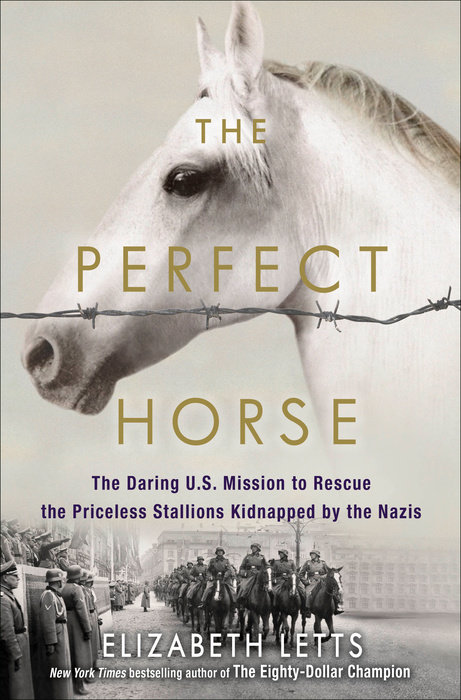 As I’ve stumbled blindly into what some might call “adulthood” over the past several years, I’ve started compiling a list of things that I wish I’d known were cool when I was younger and had so much more free time to take advantage of them. (Youths, am I right??) Aside from the obvious, such as being in bed before 10pm on a Saturday, learning things for the sake of learning is right near the top. For most of my young adult life, history in particular was just not exciting to me; bless my high school history teachers for trying their best, but I was so preoccupied with memorizing dates and places and names that I didn’t realize just how fascinating it could be. More specifically, I didn’t ever stop to think about just how much of history involved horses.

In The Perfect Horse: The Daring U.S. Mission to Rescue the Priceless Stallions Kidnapped by the Nazis, Elizabeth Letts, author of the New York Times bestseller The Eighty-Dollar Champion, explores a little-known story of World War II centered around the famous Lipizzaner stallions. These horses, whose cultural significance in Austria spanned centuries, caught the eye of Gustav Rau, the chief horse expert of the Third Reich. Rau spent much of the war commandeering horses from across Europe, including many of Poland’s prized Arabians and all of Austria’s Lipizzaners, in order to breed the perfect “master race” of war horse for the German army.

Unfortunately, as the tide of the war began to turn against Germany, the horses Rau had collected were caught in the crossfire. The lauded Spanish Riding School of Vienna was under constant threat of siege, eventually forcing the head of the school, Alois Podhajsky, to evacuate the Lipizzaner stallions from their ancestral home. Even the massive broodmare farm in the peaceful hamlet of Hostau, Czechslovakia, where the majority of Rau’s amassed breeding stock was kept, was no longer safe.

Podhajsky, along with the German officers responsible for the protection of the farm in Hostau, spent months bargaining for the horses’ safety and hoping that the war would end before it reached their farms. But in the last days of the war, they found themselves caught between advancing Russian forces (who were notorious for slaughtering captured horses to feed their armies) and the American 2nd Cavalry, a unit thankfully led by men who had a deep appreciation for and understanding of the plight of these animals. They arranged a daring mission that would ultimately place the horses under American protection, rescuing the Lipizzaners and other priceless Nazi-controlled horses from the brink of destruction.

The Perfect Horse is jam-packed with information, delving into the history of both the equine and human aspects of the story, such as Podhajsky’s journey from the Olympic dressage arena to the Spanish Riding School and the development of the modern “horseless” American cavalry unit. While it does make for a dense book, I was hooked from start to finish by Letts’s incredible attention to detail and her gripping account of the events surrounding and leading up to the rescue mission. She masterfully weaves together the many moving parts of the story, and she does so in a manner so seamless that I didn’t even comprehend just how much happened in 300 pages until I struggled to summarize it just now. Letts also manages to strike the perfect balance in providing just enough information on the larger background of World War II to help a non-history buff such as myself keep up, but not so much as to make it read like a history textbook.

So whether early 20th century European history is your meat and potatoes or you just can’t get enough inspirational horse stories, I highly recommend picking yourself up a copy of The Perfect Horse. From start to finish, it’s a truly fascinating chronicle of a dedicated group of horsemen and the risks they were willing to take to preserve the equine icon that is the Lipizzaner.

The Perfect Horse is available on Amazon.