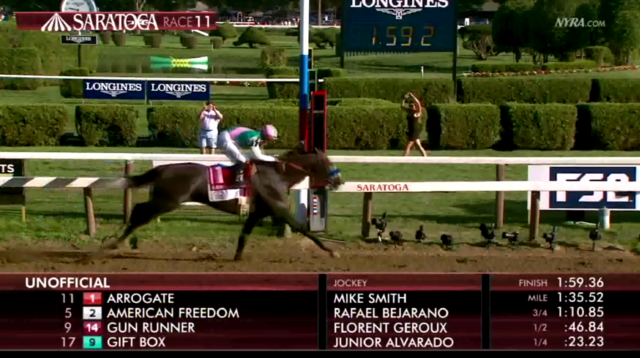 This unknown three-year-old colt took the racing world by storm on Saturday with a runaway, record-smashing victory in the Travers Stakes!

The 2016 Travers at Saratoga was always going to be kind of a tough one to pick — truly, this year’s three-year-old crop has numerous stars whose fortunes rise and fall with each passing month. Exaggerator may have been the favorite, but there was no shortage of interesting picks — Laoban, American Freedom, Gun Runner, Destin and Creator, just to name a few.

But a relative unknown took the lead into the first turn. His name was Arrogate, and this was his first starring role: he had worked his way to a few allowance wins but was untested in graded company. He was, in his defense, well-connected: owned by Juddmonte Farms, trained by Bob Baffert and piloted by Mike Smith, he certainly had a supporting cast to help him on his way.

As the field turned for home, however, there was just one horse — just Arrogate, opening his lead further and further until he finally flashed under the wire an astounding thirteen and a half lengths in the lead, setting a new Travers record time of 1:59.36 over the mile and a quarter.

Interested parties can delve into the comments sections on the major racing news sites to get their fill on conspiracy theories and creative takes on just how this smashing performance was possible, but we’ll choose to side with Baffert on this one, who said simply “That was ridiculous.”

Arrogate, by Unbridled’s Song, was purchased by Juddmonte Farms, selected by Baffert. His previous wins were over small fields in allowance races, over distances that allowed him to qualify for the Travers. Nobody, not even Baffert, seemed to know just how good Arrogate could be — but he showed them all on Saturday.

Naturally, speculation is swirling about whether or not the colt will run in the Breeders’ Cup Classic (he’s now qualified thanks to this win) and whether or not he was a one-shot wonder who will be unable to replicate this performance. Regardless of what’s next for come-from-nowhere Arrogate, however, there’s no denying that he made quite the statement at Saratoga.