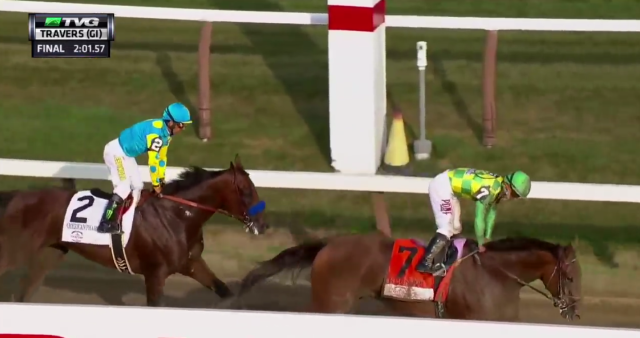 On the eve of the “Midsummer Derby” or Travers Stakes, take a video peek at some of the biggest upsets in Saratoga’s history, earning it the nickname “Graveyard of Champions.”

Saratoga, referred to as “the Spa,” is one of the East Coast’s most iconic summer race meets: nestled into the Adirondacks, the racecourse welcomes Thoroughbred champions to test their mettle. The halcyon days of summer tick away with Saratoga bridging the gap between the big spring classics and the autumn’s final tests.

The Spa has another nickname as well: the Graveyard of Champions. It sounds macabre at face value — but this nickname refers to Saratoga’s penchant for breaking the winning streaks of some of the biggest names in the sport. Best known as an “upset,” the original upset on this track traces back to 1919, when the great Man O’War suffered his only career defeat to a horse of the same name — Upset. (Many legends incorrectly state that this infamous running of the Sanford Stakes coined the word “upset” for when an underdog beats the favorite — however, the term was already in use in sports for years before this race.)

Watch some of the biggest upsets in Saratoga’s history:

The 1973 Whitney Handicap: Onion over Secretariat

(Maybe my personal favorite as an upset performance — watch Persistently’s incredible drive to sweep to the lead!)

What can we learn from the Graveyard of Champions? A reminder that horse racing is an unpredictable sport, and even the greatest champions are not infallible.

Tomorrow’s Travers doesn’t necessarily set itself up for a typical “graveyard of champions” upset — while Exaggerator is a favorite right now at 3-1, there’s no clear horse that “should” win. For bettors, tomorrow’s 14-horse race offers plenty of room for exciting picks; for horse racing fans, it’s bound to be a thriller of a race that’s truly anyone’s game.