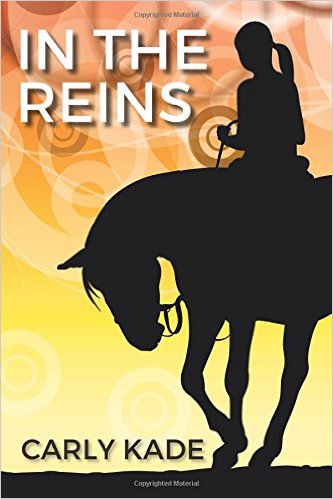 I’ve said it before, Horse Nation, and I’ll say it again: I’m not typically one for romance stories. Or romance in general, really. Just last week, my friend was trying and failing to explain the rules of tennis to me for the twelfth time, because there are exactly three Olympic sports I understand and they’re all on horseback, and the only thing I took away from it was that love means nothing. (Look, I made a tennis joke! There may be hope after all … but really, let me know when they ditch the rackets and get on with the horse dancing).

And yet, in spite of my jaded millennial ways, I have to admit that there is something strangely satisfying about kicking back in my hammock on a hot summer’s day, iced tea in one hand and a steamy cowboy romance novel in the other. (Just, no one tell my college Lit professor that I said that, or she’ll be beating down my door with Emily Dickinson within the hour.)

Carly Kade’s In The Reins begins at the end of Devon Brooke’s life as she knows it. After discovering that her fiance has been cheating on her, she packs her life into her car and heads south with no clear destination in mind, just a desire to start over. She uses her savings to buy Faith, a green Paint mare that she feels an instant connection with, and gets to work at rediscovering her roots and the love of horses that had once been a huge part of her life.

But, of course, it’s not quite that simple. Devon knows that she and Faith both need some work, and who better to help them than McKennon Kelly, the quiet, handsome cowboy and resident horse trainer at her barn? Despite the farm owner’s warnings to steer clear of him, Devon seeks out his company and assistance, ostensibly because of his seemingly magic touch with horses … although his looks sure don’t hurt. However, as elements of McKennon’s mysterious past come to light, she soon realizes that she may have bitten off more than she’s prepared to handle.

Taking In The Reins at face value, as a romance novel with a side of horses, it certainly gets the job done, and I don’t believe it’s trying to be anything but. Some of the dialogue and descriptions toed the line of too cheesy for me; I can’t honestly say I’ve ever heard a human being described as “delectable” before, nor would I necessarily want to in real life. That said, I appreciated Kade’s use of language to really capture and convey the atmosphere of the setting, which was itself such an important character in the story. With her personal life in shambles, Devon is searching for peace, and it’s immediately evident upon her arrival at Green Briar Farm that this is the place where she can begin to heal. It’s a sentiment that any horse person is able to relate to, regardless of discipline or personal circumstances.

So if you’re tired of waiting around and hoping for some tall-dark-and-handsome mystery cowboy to jingle his spurs on into your barn (and, believe it or not, that was NOT intended to be a metaphor for anything), go ahead and pick up a copy of In The Reins to live out your fantasy in fiction.

In The Reins is available at Amazon.

Eileen Cody’s love of reading goes back almost as long as her love of all things equine, and while her literary interests are about as varied as her equestrian ones, horse books naturally dominate her shelves. Find her a horse book she won’t read or a discipline she won’t try, and she probably owes you a drink or something.