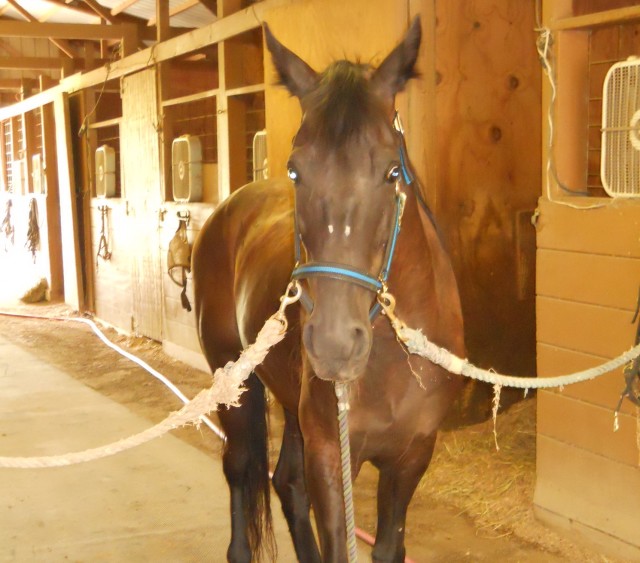 I’ve gotten attached to my assignment, Theo. I’m worried and frustrated. Ed, Theo’s rescuer/rehabber, sent an e-mail to me warning that a new problem had developed. The kid was doing so well. Now what?! Ed and I have a boffo finish in mind for the “Saving Theo” series, but losing him isn’t it.

Ed sends e-mails to me with Theo stories and updates between my visits. First – the “aww” smiley stories: Theo was a trooper during the July 4th fireworks. No meltdowns in his stall. Such a good boy. During my last visit, he and I had a moment … actually about 15 minutes where he not only stood for me to massage his poll and neck, but moved to ask for more. He usually allows a quick pat while he sniffs for treats. Ed told me he is relating and responding more, as though the shadows are shifting out of his memory.

A needle had not been brought within Theo’s view since he arrived. He always stood resolute during his treatments. The veterinarian moved in to give Theo his annual shots, which should have been a non-event. Theo wigged out. He reared onto his hind legs, pawing with the front. Ed and the vet were amazed and they teamed up to soothe the wild thing. They devised another plan and were able to give Theo his shots.

Ed thinks it possible that something related to injections given during his show career could have ignited the electric response. Ed thinks that Theo’s response showed that he is now expressing his fears rather than the prior “soldiering it out” while his back foot trembled.

Ed had another personality-revealing story for me.  “We had changed the medication going into Theo’s front feet and he seemed to be healing. Because his feet were less tender — he felt good — he decided to take off like a lunatic outside in his pen, jumping and hopping and … ran straight into the gate. He knocked it off its hinges when he skidded to the stop.” Ed had the gate double tied or Theo would have been “free at last” and loose in the front yard.

Ed continued, “Theo seemed astonished that 1) He was actually running, and 2) That he boinged off the gate. He stood stupefied, then turned and walked slowly back to the other side of his turnout.” Ed said that this epizootie was a good thing that Theo felt like running and a bad thing, because he bashed himself; the best thing was that Theo might be close to turning the corner on his front feet.

Then, my e-mail held disturbing news. After almost a year, only the toe is growing on his worst foot. The compromised blood flow (possibly from stacked shoes and/or pressure bands) hinders the hoof growth. Coupled with a sole that had been pared down to the nub, there is no hoof to take pressure from the tender sole. So Theo takes the pressure off by putting his weight on the less compromised foot. Now that foot has developed white line disease and is spongy. Both front feet are now sore and compromised.

Ed and the vet are trying new soaks. Equine friends have offered up their ideas. One was boots — unfortunately, boots are a non-starter for Theo. They build up heat and moisture, especially in a hot, humid climate. The moisture further rots what’s left of Theo’s feet and encourages the white line disease. Theo’s soles must harden.

“We have to grow this foot out enough to get some sort of shoe on him in order to raise his sole permanently off the ground; otherwise that sole is never, ever going to be right,” Ed explained. He had used the strategy with another rescue that now “runs out in the pasture like he won the Kentucky Derby, but if you take away his shoe, he hobbles around.”

The farrier had the talk with Ed about Theo’s prognosis. Theo responds as though he is comfortable on soft surfaces and only hobbles when he hits a patch of hard ground. The white line disease is the devil they are battling. They agreed they are not ready to give up yet, but Ed warned me.

For now, Theo doesn’t know he’s in trouble. He slurps up watermelon and fat grapes. He is relaxed out in his pen and is ready for bed in the afternoon. He stands with patience while he receives his treatments. He shows eager anticipation of the routine of his life in the calm, gentle world of Ed’s barn.