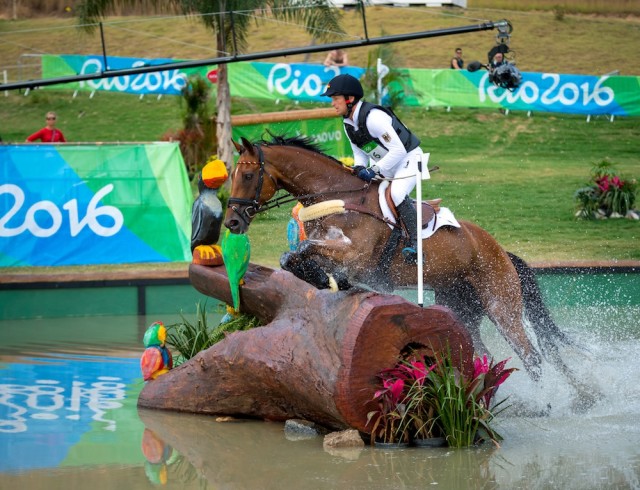 Contributor Lauren Sumner reflects on the lessons to be learned for all riders of any discipline from the 2016 Rio Olympics … and not just in the equestrian sports.

With all of the historic and unprecedented performances from the Rio 2016 Olympics, it’s hard not to feel inspired in your own endeavors. While we may not all be Olympic heroes, many of us have our own interests and hobbies that we are striving to better ourselves at. For me, the Olympics have always been something to get excited about. I have always been able to draw knowledge and inspiration from my favorite athletes and their performances.

I grew up as a dual athlete through high school and college. I ran cross-country and track while simultaneously sustaining a very active riding career. While I don’t claim to be a superstar, I have a few modest accolades to my name. I won one state championship title in the 800 meter, as well as a runner-up in the 1600. Then I decided to give collegiate running a go.

It wasn’t until I reached the FEI level in Eventing that I realized I had to devote all of my time to riding if I truly wanted to be my best. But as a dual athlete, you’ll never forget the lessons you’ve learned in both sports to aid in your progression and success. I will often reference my experiences in track and field to help paint the bigger picture.

So this got me thinking … what is it that makes an Olympic champion? I started to make a list of characteristics they all have in common: Things that I thought could help me in my own riding and training practice, as well as anyone else in sports across the board!

You can bet that each and every Olympic athlete has put their body through hell to get to where they are (and that goes for equestrian riders as well as their horses). Athletes like Michael Phelps and Usain Bolt didn’t achieve world record performances through sheer talent: They worked day and night. They have a close relationship with pain and fatigue. A champion can break down physical and mental barriers: They have come face to face with the invisible wall that blocks many athletes from running or swimming just a fraction of a second faster. And they have obliterated that wall — they’ve become comfortable with the pain and exhaustion they may be faced with on the other side.

This is what sets them apart. Most of us would be inclined to quit when our mind tells us our body has had enough. But there is always more in the reserve tank. My track coach used to say, “If you run past that wall at the end of your race, you will hit a whole new gear.” Each year when a new flock of runners came to tryouts, he would have us run 400 meter repeats at the very beginning of the season. The veteran runners (myself included) HATED this work out as it was absolute cruelty. Nevertheless, we would run ourselves to the ground each set, many of us puking our guts out just in time to get back on the line for the next set…

By the second week of practice, he would have successfully diminished our field of runners to about a quarter of its original size. We were the athletes left who were willing to push themselves past those physical and mental barriers.

Check out this Under Armour commercial starring Phelps to get an idea of what those barriers look like:

So how does this translate to Equestrian sport? Well, for me it has always meant that I will hold myself to the same physical fitness standard that is demanded of my horses to compete. As humans, we have the choice to push past barriers of our own physical limitations. However, our equine partners do not. We break the barrier for them.

For example, we decide for them at the end of the course if we are down on the clock and have to push them faster. This is why it is important for you as a rider to experience the pain and fatigue you ask of your horse. Go for a run, and when you get exhausted and feel like you’re going to collapse … start the timer over and keep running.

Take Phillip Dutton’s phenomenal save over the corner at fence 6 on the Olympic course at Rio. The sheer grit and determination he displayed by literally picking his horse up and putting him in between the flags is an inspirational feat in itself. But you can bet it was a physically and mentally taxing effort for both him and his partner Mighty Nice. To come back and finish the course in such a flawless manner after near disaster shows extreme toughness.

Mindfulness and a Positive Attidude

It’s easy to become mesmerized by the performances of athletes such as gymnast Simone Biles. She exudes such confidence and radiance throughout her routines, where even non-gymnastics fans can recognize and appreciate her brilliance. She has already encapsulated the nation by gaining our affections through her adorable yet competitive personality. But behind all of that glitz and glam is a fiercely intelligent and composed athlete. She is able to perform under extreme pressure and expectations. How does she do this?

Mindfulness, by definition, is “a mental state achieved by focusing one’s awareness on the present moment, while calmly acknowledging and accepting one’s feelings, thoughts, and bodily sensations, used as a therapeutic technique.” This is the act of remaining in the present, with a positive attitude, free of negative judgement.

Mindfulness is perhaps one of the most underutilized terms I have encountered in my own riding career. During one season of track, our university team underwent a study in which two PhD students taught and performed meditation exercises to us. But the study had far more of an impact on my riding than it ever did my running. It taught me how to be present, rather than just go through the motions. And it taught me how to ride with a more positive outlook.

Michael Jung is a master of mindfulness. He is the first rider to win the Olympics on his dressage score, and he has done that feat twice over. Not only is he the best, but he is the best on multiple horses. You can see that in how he rides a dressage test, or attacks a jumping course, that he is ALWAYS present. He lives in the tiny moments of each jump and each stride. He rides each stride as if it were his first.

In his Olympic dressage test at Rio, he and Sam made the mistake of swapping leads early in the counter canter, receiving a low 4 mark. He immediately corrected his mistake and was back to business throughout the rest of his test. He never let the mistake negatively affect him or his outlook. Mindfulness is the difference between having a mistake, and letting your nerves rip you apart at the seams … or moving past your mistake and getting back to your typical 7-9 marks. Mindfulness takes hard work. It’s just like exercising any muscle, except it’s your brain. It’s a slow and steady technique that will greatly enhance your performance.

Never Ease Up Before the Finish Line

With the exception of Usain Bolt, who is notorious for being able to casually stride across the finish line ahead of his challengers, you will rarely see a champion ease up before the finish of a big race or performance. There is simply too much at stake. In track, we learned this lesson the hard way. Countless races are lost by simply thinking you have it in the bag, but somebody with more grit will be high up on your heels to clinch the win. It simply comes down to a question: Who wants it bad enough?

One of my favorite Olympic moments from the coverage in Rio was during the women’s 400 meter final. While I had my hopes in favor of Allyson Felix, I was inspired by the passion that Shaunae Miller expressed by diving across the line to win the gold. This mentality is something that I have carried over into my riding as well. Ride every stride, and don’t leave a single point on the table. After all, you don’t want to leave the track or exit the arena feeling like you didn’t give it your all.

Charlotte Dujardin certainly didn’t leave a single point on the table when she scored an Olympic record of 93.9% in her musical freestyle. Granted, she has loads of experience at the level. But it’s how she approaches her test which helps her rack up so many points. From the moment she comes down the center line, to her final salute, she and Valegro are BRINGING IT.

I’m not advocating that you should sign yourself up for the next marathon, or that you come FLYING down your center line at a blazing speed to salute. I do hope some of these analogies can help you in your own endeavors or equestrian sport. Make a point to incorporate little things in your daily routine that remind you of your favorite athletes and champions. Start breaking down the tiny barriers that hold you back. Keep working hard, and success will follow.

Lauren is an Event rider from Area II. She has two horses: her retired mare Ella, and her adopted OTTB Eddie. She also works full time as a graphic designer.