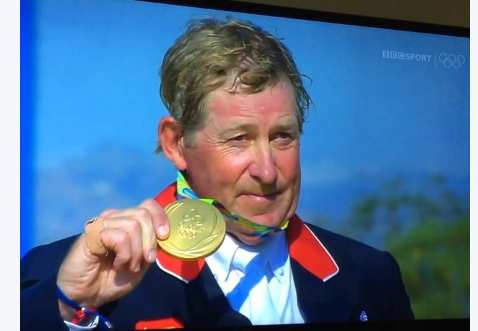 And that’s a wrap! Today’s showjumping individual final was one for the books, culminating in a dramatic win for Great Britain’s veteran Olympian Nick Skelton and Big Star:

Big Star looks like he could jump another round or two. — Horse & Country TV (@HorseAndCountry) August 19, 2016

I may be biased but I think this is what a hero looks like. #NickSkelton #mydad pic.twitter.com/ab96OSoy2p — Dan Skelton (@Dannskelton) August 19, 2016

I can’t help but fangirl a little over the stunning Big Star, and apparently neither can eventer Doug Payne:

…And further proof that Canadian bronze medalist Eric Lamaze rides like a boss:

What an amazing jump off! Congratulations to all the riders, and congrats to our own Eric Lamaze for bringing home individual Bronze!???#rio2016 #twohearts #showjumping #teamcanada

The problem with having so many riders in the jump-off is the won’t all get medals, but they all deserve one #EquestrianJumping #Rio2016 — Robyn Law (@LeFailFish) August 19, 2016

We’re glad you spent some time with us at Horse Nation during the 2016 Rio Olympics, and we already can’t wait until Tokyo in 2020. In the meantime — go riding!