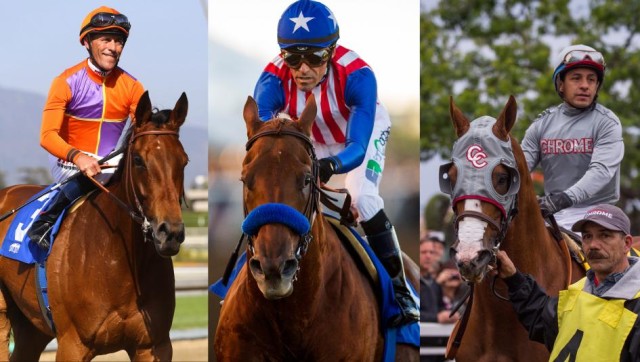 There will be so much star power at Del Mar that we’re not even sure we can handle it.

Hold on to your hats, folks, because this is gonna be big: international superstar California Chrome, multi-champion mare Beholder and the indomitable Dortmund are preparing for an epic showdown in tomorrow’s Pacific Classic, taking place at 6:15 PM (Pacific).

It’s the race horsemen everywhere dream of: the three best handicap horses finally facing off on the track together, putting it all on the line to determine, at least on this one given day, who is the greatest among them.

It’s tough to bet against Chrome, especially this bigger badder Chrome that’s all hard rippling muscle and presence in his five-year-old season, still under trainer Art Sherman. He took a good chunk of time off after conquering his unfinished business with the Dubai World Cup and then won the Grade II San Diego Handicap in an exciting duel with Dortmund:

Chrome did draw the unlucky and unenviable Number 1 slot on the rail — it’s worth noting that he did draw the rail in his Meydan prep for the World Cup and still walked away with an easy win, but that was against much lighter company than this loaded field. Chrome will be piloted by his longtime jockey Victor Espinoza.

This gigantic son of Big Brown may have been second to Chrome in the San Diego Handicap, but he fought him every inch of the way and shouldn’t be counted out for the Pacific Classic either. The San Diego was Dortmund’s first race back as well off of a long break, and trainer Bob Baffert treated the race as a sharpener to help his four-year-old prep for a light summer campaign. The endgame, of course, is the Breeders’ Cup Classic.

Dortmund will break from a much more favorable outside post as number 8 under jockey Rafael Bejarano.

Few horses have run recently like this rockstar mare, under the guidance of Richard Mandella. Beholder has amassed a huge fan following, thanks in part to her incredible eight-race win streak that traced back to 2014 and included a win in last year’s Pacific Classic. Gary Stevens and Beholder are looking to repeat that feat again in 2016, though the mare suffered a close defeat in the Grade I Clement L. Hirsch Stakes last month.

If the mare is true to form, this could be an epic battle of the sexes to remember. Here’s her mind-blowing 2015 Pacific Classic victory:

If all three of these horses are on form, there’s no telling what will happen on Saturday. It’s also worth noting that the rest of the field are no slouches either: Hopportunity and Hard Aces both have Grade I wins under their belts, and Imperative has won a graded race himself. All in all, the 2016 Pacific Classic is shaping up to be one heck of a race, and we can’t wait to watch it unfold.