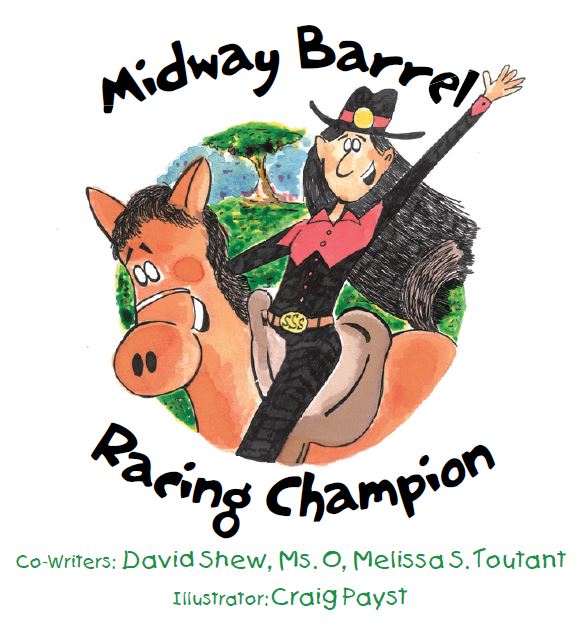 A series of barrel racing adventures from the eyes of a horse.

Told through the eyes of Midway, a sharp, fast, and loving little horse, Midway Barrel Racing Champion chronicles the summer adventures of Midway and his little lady Maria as they seek the chance to be the greatest barrel racers in the United States. It follows their races all over the U.S., from Utah to Texas to the Dakotas, and they seem to have a marvelous time.

The book gives lots of fun details about each state that they visit, such as where the rodeos are held and what sights they see along the way. It demonstrates sweetly the love that girls and horses share, especially when you’re all each other has out on the road. And it also throws the devoted dad in the mix, who of course ensures that horse and daughter both get to live out their dreams.

The illustrations are darling, and captures with jubilant movement and expression the fun of being a young competitor crisscrossing America to chase a dream.

I have a few critiques of this title: first and foremost, the cardinal sin of being an “educational” title but misspelling the word “bridle” and misusing other critical terms that everyday horsemen can distinguish and will cringe at when they read it. Also, for ease of reading for young readers, I wish that it were formatted into paragraphs instead of a large block of text.

Second, and most importantly, (spoiler alert) I wish there had been some struggle, foe, or trial to overcome. Anyone who has competed on the circuit of any western or English sport will tell you that you never win everything you enter, even if you’re the greatest competitor in the world in your sport. Midway and Maria, fast and talented though they may be, simply couldn’t and shouldn’t win every barrel race they enter. Sometimes you knock a barrel down, sometimes a horse just isn’t into it that day. Sometimes riders make errors that cost you time in the turn.

What makes a winning combination powerful is not their ability to always win, but their ability to overcome and succeed again. Perhaps future adventures of Midway and Maria will allow them to explore the full range of emotions a horse and rider experience in a season of competition.

All told, it’s a fun little adventure book with beautiful illustrations, and a cute read for the young barrel racer in the family.

Midway Barrel Racing Champion is available from the book’s website and on Amazon.