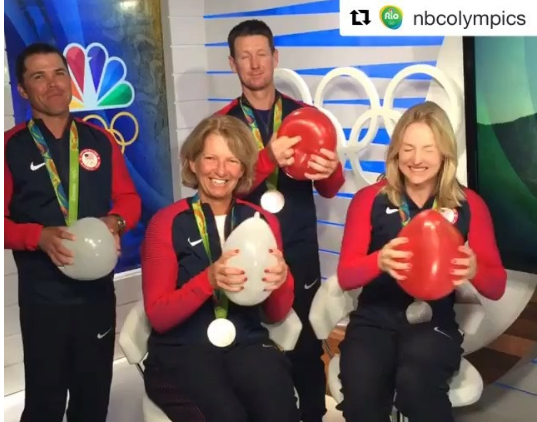 Today’s showjumping at the Rio Olympics was full of ups and downs (no pun intended… maybe). After Beezie Madden withdrew Cortes ‘C’ this morning due to a tendon injury, Lucy Davis, Kent Farrington, and McLain Ward went on to clinch the silver for Team USA.

Everyone was pumped for showjumping, including these pugs:

Nothing like having a glass of wine, sitting down and having a nice quiet night in with the show jumping. Little did we know that the show jumping this year was actually going to be interactive, it would star two derpy pugs and it would involve tipped water glasses, crushed testicles and bitten toes. Together, mr biscuits dad and I made an exceptional double oxer ? #showjumping #rio2016 #equestrian #mrbiscuitthepug

Let the celebrations begin! Everyone looks apprehensive here except for Beezie… We assume that the horses weren’t nearby for this particular celebration:

Hooves and keyboards don’t mix well, but we get the gist of American Pharoah’s excitement:

Ever wonder what goes on behind the scenes at the Olympics? The Horse introduces the 2016 Olympic and Paralympic equine veterinary team:

Meanwhile, our friends in the dressage world bid farewell to Rio:

Sad to be leaving #twohearts #jointhejourney A photo posted by Charlotte Dujardin (@charlotte_dujardinobe) on Aug 17, 2016 at 11:15am PDT

We’ll continue to bring you coverage of the Olympics as showjumping carries on! Keep it locked on Horse Nation.