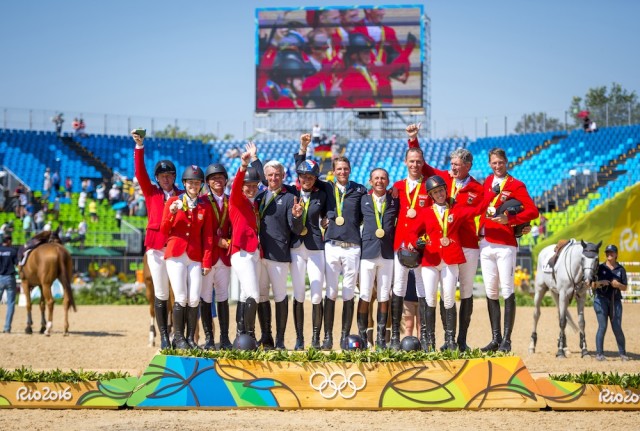 No venue does drama like the Olympics: what a roller-coaster day of showjumping! This round’s on us: it’s the Olympic Happy Hour, a pint-sized recap of the day’s news and headlines.

So much win and so much happy in this image. Team Jumping Medalists Gold France,Silver USA, Bronze Germany
Rio Olympics 2016
Photo Arnd Bronkhorst

Rails fell, hopes rose and horses flew in Rio today: one of the most exciting team finals in history played out at the Olympic Equestrian Centre this morning including a dramatic jump-off for the bronze medal. When the curtain fell on Deodoro, France had earned team gold, followed by the USA with silver and Germany edging out Canada in the jump-off for bronze.

Here are the final standings for team competition (including faults: these rankings do not reflect the jump-off results that saw Germany conquer Canada).

As today’s team final also served dual purpose as the third individual qualifier, you can click here to see who will be competing for individual honors on Friday after tomorrow’s rest day (click the “Results” tab).

If you missed the live stream or can’t access a replay, start right here to relive the day. Our sister site Jumper Nation provided a round-by-round live feed with details on each combination’s performance as well as entertaining and informative commentary. Simply start at the top and work your way down to relive all of the day’s edge-of-your-seat action. [Rio Olympics Show Jumping Team Final – Live Updates]

Any way you look at the day’s competition, the team final was an historic showdown. The drama of equestrian competition took Rio as its stage today with last-minute injuries and scratches, a brilliant don’t-look-back win for France and enormous pressure on several teams who no longer had the option of a drop score. Our sister site Jumper Nation recaps the entire day from the first round to the thrilling jump-off for bronze. [Rio Olympics Team Final: France Wins Gold, Team USA Silver With No Drop Score]

The pressure was on three members of Team USA today when Beezie Madden and Cortes ‘C’ withdrew this morning. It was discovered this morning that “Tiny” had suffered a tendon injury that took him out of the remainder of the Games. Without the luxury of a drop score, the remaining members of the US showjumping team — Kent Farrington, Lucy Davis and McLain Ward — needed to be on their game to stay in contention. Team USA had plenty to say in reflection on their rounds. [U.S. Showjumping Team Scores Silver Behind France]

What did the individual riders have to say about the day? Several topics came up for discussion in the post-competition press conference, and not only were members of the medaling teams present but also course designer Guilherme Jorge and ground jury president/FEI jumping committee member Stephan Ellenbruch. The conversation ranged from reflections on the day’s competition to the blood rule disqualifications and possible changes to the team format in future Games. [“It was hard to imagine taking a medal and especially the gold” | Quotes From Rio]

The showjumping equestrian competition at this year’s Olympics seems to have seen more than the usual eliminations, disqualifications and scratches. Medical emergencies including Cortes’ tendon injury (USA) and Cassionato’s colic (GBR) forced last-minute withdrawals, and several riders retired on course after their Rio journey didn’t go quite as planned. For all instances of good horsemanship in knowing when to quit, there’s also been quite a bit of controversy over blood rule eliminations. [Thrills and Spills, Spurs and Maladies at Rio Olympics Show Jumping]

We’re loving UK-based Horse & Hound’s “Tales From Rio” series: meet Canada’s Tiffany Foster. Each day, H&H has been sharing the behind-the-scenes stories of individual riders that remind us that the equestrian sports are really something special. Tiffany Foster tells the story of her youth spent acting in commercials to pay for her riding lessons and what it’s like to be competing on Ben Maher’s 2012 Olympic gold medal ride Tripple X. Foster credits her support crew (including her number one fan Mom) with her success. [Tales from Rio: ‘We had no money; I did Polly Pocket commercials to pay for lessons’]

Thursday is a rest day for the showjumpers, but we’ll be sure to bring you news from what’s bound to be a captivating individual medal round on Friday! Keep it locked on Horse Nation for daily news, and don’t miss our sister site Jumper Nation for in-depth coverage of the Olympic games.