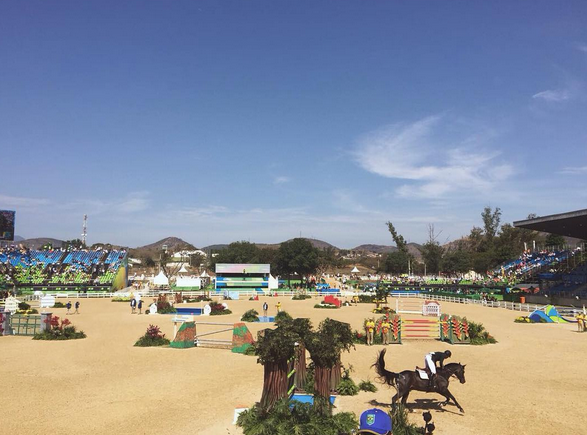 Judging by the electric atmosphere in the stadium at Rio, it’s safe to say that showjumping might be THE most popular Olympic equestrian sport. Compared to the subjective dressage in pure dressage and eventing, or eventing’s long and looping cross-country course, it’s easy to follow: the horse and rider who get around the fastest and keep all the jumps up, win. National pride was strong today among fans, giving the Olympic Equestrian Centre the kind of feel one expects from the best competition in the world.

Our thoughts are with Michael Whitaker and the rest of Team Great Britain as this news broke this evening that Cassionato was suffering from colic symptoms:

Best of luck for Cassionato’s recovery.

Before we take our closer look at the social media of the day, let’s give a big Horse Nation shout-out to the real heroes of Olympic showjumping, the popular drag tractor squad.

were those just cheers for the man on the tractor….? #EquestrianJumping @HorseHour

Other Olympics were perhaps not so lucky — but full of class even in defeat.

And Twitter, as usual, was full of the best concise observations on the day:

What I would do to ride Azur over a ground pole. #EquestrianJumping #Rio2016 #TwoHearts #TeamUSA

Michael Whittaker just casually jumping through a combination and over the middle oxer one handed! #legend #TwoHearts #EquestrianJumping

Olympic riders: they’re just like us! In some respects anyway.

No one can deny that Team Brazil lit up the stadium!

And a few of our favorite shots of the day:

The calm before the storm. #rio2016 #twohearts

We’ll continue to bring you coverage of the Olympics as showjumping carries on! Keep it locked on Horse Nation.