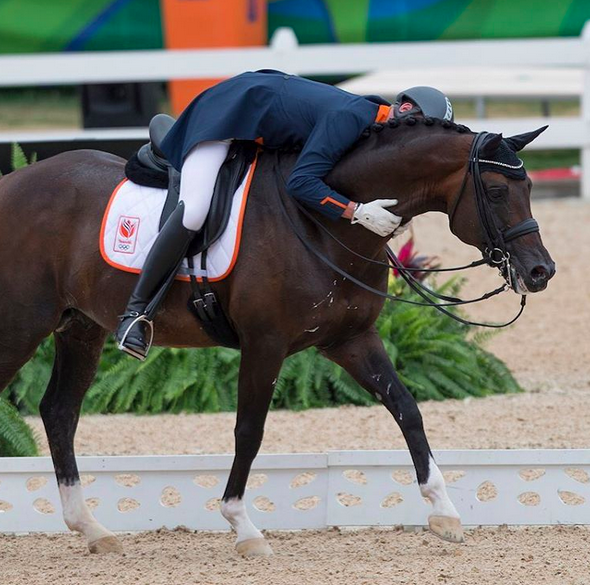 The Grand Prix Special, the phase of competition that named the medal teams, proved to be a dramatic day of ups and downs that eventually saw Germany taking team gold, Great Britain claiming silver and USA capturing bronze. For some athletes, their Rio journey is now at an end, while others are looking ahead to Monday’s freestyle, the individual medal finals.

Needless to say, the outpouring of support for our dressage athletes as well as responses from the athletes themselves dominated social media today.

We’ll start off with a chuckle at the incomparable Charlotte Dujardin, who apparently deals with Olympic pressure by tidying the barn like a good equestrian.

Team USA’s spirit and camaraderie is an inspiration all its own!

“I’m going to take @CSJDujardin to Christ the Redeemer tomorrow to pray for Monday” @HesterDressage in the press conference! #TwoHearts — The FEI (@FEI_Global) August 12, 2016

Ireland is beyond proud of its finalist Judy Reynolds and Vancouver K, the first Irishwoman to qualify:

“Judy Reynolds – Olympic Finalist” has a nice ring to it. #TeamIreland‘s best ever finish in #EquestrianDressage ?? pic.twitter.com/Rg9AOwMPmm

And this is the moment my proud father in law Joe Reynolds and Judy’s husband @patrickheavey173 found out Judy is going to #Dressage Freestyle Final #GoJudy #TeamIreland #TwoHearts A photo posted by Tara O’Connor (@taradolloconnor) on Aug 12, 2016 at 10:55am PDT

The Germans just ran over to celebrate with their fans before the lap of honour!! Incredible atmosphere #TwoHearts #EquestrianDressage — The FEI (@FEI_Global) August 12, 2016

While we might think of dressage fans as more of a “golfer’s clap” kind of crew, these photos prove that we know how to party.

At the end of the day, it’s all about the horse and rider working as a team.

We’ll continue to bring you updates from Rio as competition continues! Showjumping kicks off on Sunday, and dressage concludes on Monday with the individual freestyle and medal ceremony