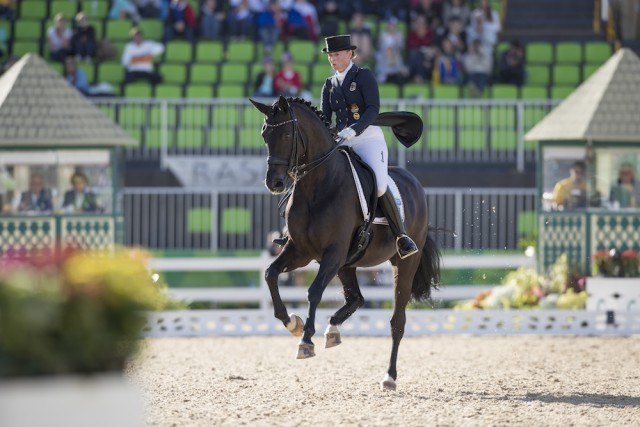 Kick back with our pint-sized recap of today’s news and headlines from the Grand Prix Special and beyond!

What a day! The Grand Prix Special was a nailbiter for naming team medals: while Germany held a commanding lead and Great Britain had the ultimate ace in Charlotte Dujardin and Valegro, the Netherlands and United States battled through to the very last ride with USA’s Larua Graves and Verdades sealing the bronze with an 80.63%.

Here are the final team standings:

(Great Britain is highlighted because it was the last team to perform.)

Didn’t get to catch the Grand Prix Special today? Don’t worry, because the good folks at Chronicle of the Horse kept a live thread running all day long. Scroll to the bottom and work your way up to relive the ups and downs of the day, as well as fun trivia facts about individual riders and great photography. [Round-By-Round: Rio Olympic Games Grand Prix Special]

One of the biggest upsets of the day was Isabell Werth and Weihegold OLD marking better than Dujardin and Valegro. All in all, it was a red-letter day for Werth, who made history by equaling Reiner Klimke’s six gold medals and Anky van Grunsven’s nine medals overall. Her first medal was earned in Barcelona in 1992 and since then Werth has become a dressage icon. Germany reclaimed the team gold today after Great Britain took those honors in 2012. [Germany Reclaim Dressage Title As Werth Joins The Greats]

The US bronze is extra-special as it’s the first time USA has medaled in dressage since Athens. That was 2004, and the team included Lisa Wilcox, Guenter Seidel, Debbie McDonald and Robert Dover. It’s come full-circle this year, with Dover serving as chef d’equipe  and McDonald as the personal coach of USA’s Laura Graves and Kasey Perry-Glass. [U.S. Dressage Team Reclaims the Podium With Team Bronze]

If you did get to watch live or a replay, you might have noticed something about Great Britain’s Fiona Bigwood: She’s riding with an eyepatch, thanks to double-vision lingering after a fall two years ago. Though she was wearing a helmet, she still suffered a concussion and nerve damage to her right eye. Her mount Orthilia is a quiet and steady companion, and Bigwood credits the mare with bringing her back to international competition thanks to her big heart and their strong partnership. If that’s not the ultimate #TwoHearts story, we don’t know what is. [Orthilia Brought Fiona Bigwood Back To The International Stage]

Judy Reynolds is making Irish Olympic history: She is the first Irishwoman to make the individual finals in dressage. Her horse “JP” or Vancouver K belongs to her parents, and her father as well as her husband have been notably and wildly supportive spectators in Rio. She’ll be riding on Monday in the freestyle. [Judy Reynolds becomes first Irish woman to reach Olympic finals in dressage]

And one note for the showjumpers: three horses were sent to the holding box and one will be re-inspected on Saturday. A total of eighty-seven horses were presented for the showjumping competition which kicks off on Sunday. Three were sent to the holding box: Nino Des Buissonets (Switzerland’s Steve Guerdat, defending champion), Amarillo (Australia’s James Paterson-Robinson) and Eliot DWS (Argentina’s José María Larocca and the reserve horse). The first two horses passed upon re-inspection but Eliot DWS will be re-inspected on Saturday. [Defending champion held at Rio Olympic’s showjumping trot-up]

Keep it locked on Horse Nation for more Olympic coverage!