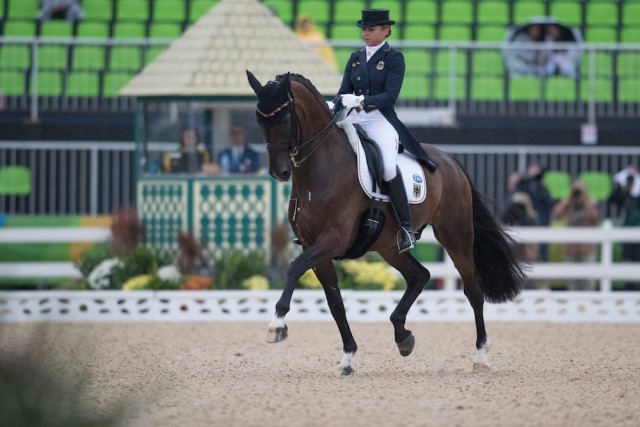 Here’s your pint-sized recap of the first day of dressage: we’ve got summaries of the day’s top headlines and stories on tap so you don’t have to bar-crawl all night long to catch all the important news.

With the wild ride that was four days of edge-of-your-seat incredible eventing, it’s comparably fairly relaxing to sit and watch dressage take over the Olympic Equestrian Centre: there’s something soothing in slowing things down and watching horses and riders dance across the arena. But if you thought dressage would turn out to be boring after the drama of eventing, you’ve got it wrong: today’s first day of Grand Prix dressage was full of ups and downs.

Here are the individual standings after Day 1: the other half of the contestants will ride tomorrow, including plenty of fan favorites like USA’s Steffen Peters and Laura Graves, Great Britain’s Charlotte Dujardin, Germany’s Kristina Broring-Sprehe and Isabell Werth and the Netherlands’ Hans Peter Minderhoud — a pack of game-changers if we ever saw them.

And here are the team standings: to no one’s surprise, Germany’s got a healthy lead as they hold the top two individual slots. With tomorrow’s epic predicted showdowns, we’re looking forward to seeing if Great Britain can take back the lead to defend its team gold medal, if Germany will continue to unequivocally dominate, or if the Netherlands or USA can fight their way to the top.

Heavy favorites Germany are living up to the expectation, holding the top two individual slots and the team number one handily. You know it’s good when the team newcomer lays down a 77% in his first-ever Olympic games for second place, and you know it’s going to be even better when the last rider of the day marks an 80% … with an error. The Netherlands hovers with the potential to medal but cannot afford a drop score now that one of their riders retired mid-test (more on that later). Great Britain still has the ultimate ace up their sleeve in Charlotte Dujardin and Valegro to play tomorrow, and the United States is not out of contention yet either in a solid fifth. [Germany Sets the Standard on First Day of Rio Grand Prix]

Dutch rider Adelinde Cornelissen retired her 19-year-old gelding Parzival early in her test, creating mass speculation. Cornelissen reported that Parzival had suffered an insect or spider bite some time early on Tuesday that caused his cheek to swell and for the gelding to spike a fever. All-day attention brought the swelling and fever down, and with the team vet’s approval Cornelissen intended to give the Grand Prix a try for the team placing. A few maneuvers into her test, however, Cornelissen decided that Parzival was not at his best and retired, in what many are viewing as solid horsemanship. [Adelinde Cornelissen’s Parzival out of Rio: ‘His body was full of toxic fever’]

What did the top 5 individual riders have to say about their tests? From balancing their mistakes to contending with the constant sound of gunfire all day (from the adjacent military base, which will not be practicing any more shooting drills for the duration of the Games) they’re covering quite a bit of ground. From their personal reflections to fun facts about each horse, get to know the five riders currently at the top of the standings. [Day 1 Olympic Dressage Leaders Reflect On Their Tests]

Brazil’s bright young things: All four members of the Brazilian team are under the age of 25 (and two of them are siblings — talk about a talented family). The eldest, 24-year-old Luiza Tavares de Almeida, is representing Brazil in her third career Olympics. Whatever they’re doing in Brazil, we want some of it. [Brazil Olympic Team All Under 25 & 2 Members Of Same Family]

Yes, there was another bullet at the equestrian site, this time near the stabling area. Authorities were unable to confirm exactly where the bullet came from, and alternately state that there is no danger at all to those working within the equestrian center and also that there is no way to 100% guarantee security. No one was injured in today’s incident, but after Saturday saw a bullet come through the roof of the equestrian media center it does raise questions especially in the minds of those on-site. [Bullet confirmed near Rio Olympics stables: ‘No one can 100% guarantee security’]

Keep it locked on Horse Nation for more dressage coverage and continued headlines from the Olympic Games! Go riding.