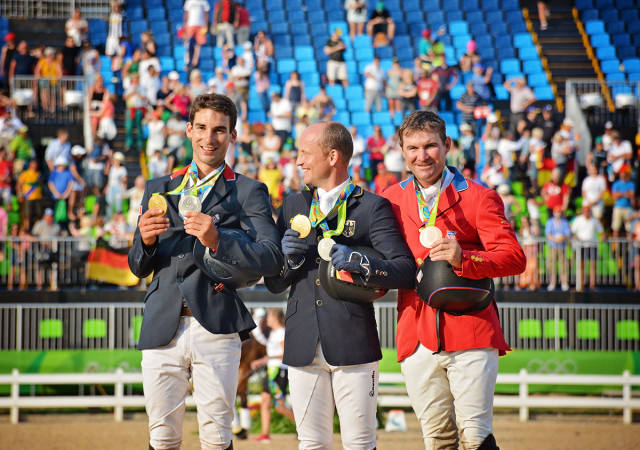 This round of celebratory drinks is on us, Horse Nation! We’re raising a toast to the eventers, who concluded their competition today with team and individual show jumping.

If you like nail-biters, suspense and sitting on the edge of your seat, today’s show jumping rounds to conclude eventing were basically custom-performed for you. Leaderboards shifted, dreams came true and hearts were broken — all in a day’s work for the equestrian Olympics.

If you missed out on the action of the day, catch up with our sister site Eventing Nation’s live threads for both the team show jumping and the individual round — start at the bottom and work your way up to catch notes from every round.

France made a good climb from third place to gold medal in the team competition on only two clear rounds. It’s a testament to the challenge of yesterday’s cross-country that it took only two clears to win the team round — there were many tired horses and riders making errors all day long in the show jumping ring. Germany climbed from fourth to silver, and Australia dropped to bronze. New Zealand had a particularly heartbreaking drop from second to fourth. [France takes team gold as Britain delivers four clears to rise to fifth in Rio Olympics eventing]

Speaking of New Zealand, what happened to that strong second place position? Unfortunately, living legend Mark Todd had a devastatingly poor performance with Leonidas II; the horse was uncharacteristically anxious and inattentive and the pair dropped four rails to bump New Zealand out of medal contention. Don’t beat yourself up, Toddy, you remain an inspiration to us all. [Rio Olympics 2016: Sir Mark Todd devastated as Kiwi three-day eventers miss out on medals]

Forever Jung, Play It Again Sam, etc. While we all had our favorites to root for, it’s hard not to love Germany’s Michael Jung and Sam FBW, who clinched back-to-back individual gold medals today. Of note is the fact that he finished on his dressage score. The only person to ever do that at the Olympics before was — you guessed — himself, in 2012. France’s Astier Nicolas took silver and the USA’s own Phillip Dutton brought home the bronze. Again, if you like nailbiters, this individual round was for you. [Michael Jung and Sam Win Olympic Gold Again, Phillip Dutton Takes Bronze]

Okay, so we know how this one turned out already — but how much does the two-round show jumping format at the Olympics affect standings? It’s not the typical format that most of these international horses are used to: at the Olympics, horses and riders compete in one round of show jumping for the team, and then the top 25 individuals compete in a second round to determine individual medals with penalties carrying over from the team round. Take a look back at historic performances to see just how influential this second round can be. [How Much of a Leaderboard Shake-Up Can We Expect Between Rounds 1 and 2?]

If your new favorite eventer isn’t Carlos Lobos Muñoz, it will be after reading all about him. Identified by fans and fellow eventers alike as “that Chilean kid,” the Olympics was Lobos’ first four-star event. He’s worked with his equine partner Ranco for five years; the horse is owned by the Chilean army and Lobos is a student at the cavalry school, getting his equestrian training in at 5 AM. [From The Barracks To The Olympic Games]

Stats lovers, look no further than EquiRatings. The “equestrian data braintrust” apparently had a blast compiling statistics and facts about Olympic eventing and laid out in writing what we suspected all along: the Rio eventing competition was some of the most challenging and even epic eventing we’ve ever seen. [10 Olympic Stats from EquiRatings That Kind of Blew Our Minds]

Equestrians, don’t leave your seats, because dressage is coming up tomorrow. The trot-up took place today and two horses out of 63 were held, with Sweden’s Dante Weltino OLD under Therese Nilshagen ultimately not passing. Click here for a beautiful photo gallery from the jog. [Two Held and One Spun At Olympic Dressage Horse Inspection]