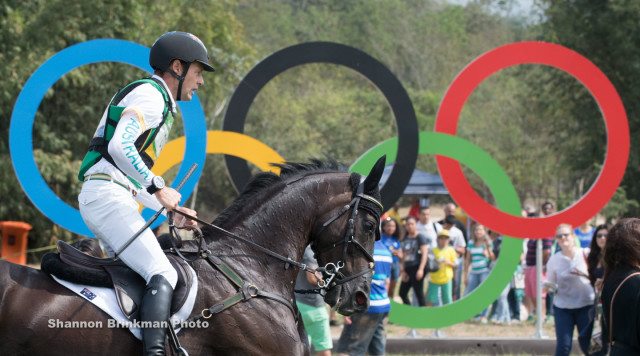 Cheers, Horse Nation — let’s raise a glass to the eventers, who might be seeking a stiff drink of their own after a grueling cross-country day. Here’s your pint-sized recap of what went down in Rio today.

Just an hour or two into the day, it became pretty clear that Pierre Michelet’s cross-country course in Rio was rapidly proving itself to be one of the toughest, most challenging tracks in recent Olympic history. With just three riders finishing double-clear, Phillip Dutton’s words from Sunday evening sound pretty accurate: “I definitely think that if you win a medal here, you’re going to deserve it. It’s a proper four-star.”

If you don’t want any spoilers, check out the rider-by-rider recap (scroll to the bottom and work your way up). Our sister site Eventing Nation‘s Leslie Threlkeld did a masterful job reporting via the live stream on each and every rider that tackled the course today, from the triumph of a safe trip to the heartbreak of each refusal or fall. From this point onward in today’s Happy Hour, there will be spoilers aplenty — you’ve been warned. [Rio Olympics Cross Country Live Updates]

Meet Camilla Kruger, Zimbabwe’s first ever equestrian competitor. This story from Horse & Hound was written prior to today’s cross-country performance, but gives us a glimpse into this equestrian’s story, the help she received from the FEI to be able to compete at the Rio Olympics, and how her mount Biarritz wasn’t even her first choice. (Kruger went on to finish clear in today’s cross-country and only accrued time penalties.) [Tales from Rio: Zimbabwe’s trailblazer and the horse she was not convinced by]

What did the riders think of Michelet’s challenging, technical course? The Chronicle of the Horse compiled interviews from 16 individual competitors, including those select few that made double-clear as well as riders who were eliminated due to falls or refusals. The interviews paint an accurate portrait of the complex course and the true test it asked of horses and riders. [Riders React To The Rio Olympic Cross-Country]

Catch the details of the top five individuals as well as how the North American teams are faring. EN’s own Jenni Autry is on the ground in Rio and spoke with riders all day about their experience over the cross-country track. The USA’s Boyd Martin and Phillip Dutton finished clear with time penalties, but Clark Montgomery and Lauren Kieffer were not so lucky. Canada had a better day, with three of four riders completing the course to move the team to 11th. [Chris Burton & Aussies Lead After Wild Rio Cross Country, 2 in Top 5 for USA]

And to answer the big question burning in everyone’s minds, it turns out that the mystery media tent bullet was not from a military training exercise gone wrong. Surprise — the bullet had reportedly been fired at a police blimp stationed over the city to help aid in security for the Olympic Games. The implication by authorities is that the shot was fired to bring down the blimp, as its cameras could supposedly detect lawbreaking taking place in Rio’s favelas, or slums. [Bullet That Entered Olympic Games Equestrian Venue Apparently Intended For Police Blimp]

Here are the individual standings after cross-country:

And here are the top five teams:

There will be no live-stream available for the morning trot-up, but EN will be live-tweeting the jog; follow along at @eventingnation.

For in-depth eventing coverage, visit our sister site Eventing Nation — and don’t forget to use the #TwoHearts and #JointheJourney hashtags for all of your social media discussion of equestrian events at the Olympics!