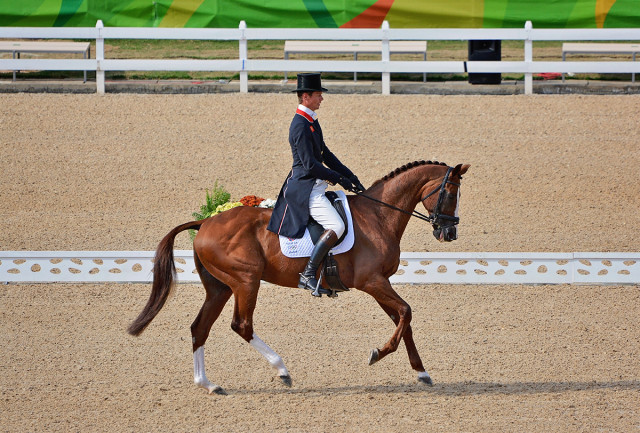 Every day during the Olympics, we’ll be bringing you the day’s headlines in a pint-sized format: pour yourself a cold one and catch up on today’s big stories.

Cheers, Horse Nation! Each evening we’ll be pulling together the day’s top stories from Rio in one easy-to-read summary format: think of us as your favorite sports bar rather than the long bar crawl from site to site to catch all the day’s news.

The second day of eventing dressage wrapped up today, with riders preparing to contend with a challenging cross-country course tomorrow. Great Britain’s William Fox-Pitt remains the individual leader, holding his own at the top of the leaderboard with Chilli Morning on a 37.0. Phillip Dutton and Mighty Nice are individually in 15th with a 43.6, keeping the US team in sixth overall. Germany leads the team standings with three riders in the top eight (though they have no individuals within the top three). [William Fox-Pitt Keeps Rio Lead, Phillip Dutton Best for U.S. in 15th]

Spectator attendance has been low at multiple events, including eventing dressage: Olympics organizers point the blame on long security lines preventing fans from getting to various venues on time — even typically well-attended volleyball, held on the iconic Copacabana Beach, included lots of empty seats while the security queue stretched for blocks. Organizers promise that the situation will be remedied later this week. [Olympic venues see thin crowds for some sports in Rio]

Great Britain’s Pippa Funnell remembers her ride Billy the Biz’s owner after ninth-place performance today: A score of 43.9 placed the pair in ninth place individually, which is thrilling for Funnell as the eleven-year-old horse is still fairly green. Billy the Biz’s owner Carol Toliver passed away in June, and Funnell imagined she was looking down proudly at her horse’s performance today. [Pippa Funnell ninth in Rio Olympics eventing dressage: ‘His late owner would be proud’]

Despite a roster of spectacular performances and wonderful individual stories, all anyone is talking about in Rio is the bullet that came through the roof of the media tent — and understandably so. No one was injured in Saturday’s incident, but officials are still tight-lipped about exactly where the bullet came from as they continue to investigate. The equestrian center is located on a military facility; several authorities believe that the incident is not related to the Olympics but security has reportedly been tightened around the facility. [Updated: Shot Fired Inside Equestrian Venue at The Olympic Games]

Want to catch a sneak-peek of the work of art/extraordinary challenge that is tomorrow’s eventing cross-country course? Our sister site Eventing Nation presented a preview of each fence on the tough Pierre Michelet-designed course, which will not only test horses and riders from a technical standpoint but also require top fitness. To top it off, the fences are visually stunning: click here for a virtual tour. [Your Colorful Guide to the Rio Cross Country Course]

For in-depth eventing coverage, visit our sister site Eventing Nation — and don’t forget to use the #TwoHearts and #JointheJourney hashtags for all of your social media discussion of equestrian events at the Olympics!