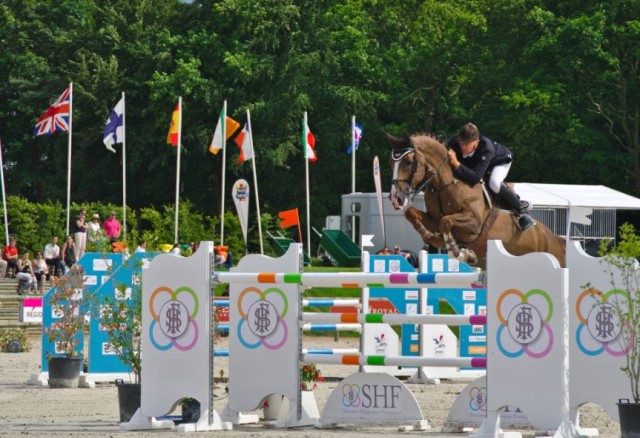 Four equestrians have received one of the highest honors you can be given by your nation: They are bearing the flag of their nation in the opening ceremonies of the 2016 Olympic Games in Rio de Janeiro tonight. The four horsemen (as we are now officially dubbing them) are as follows:

Sheik Ali Al Tani is a star of the show jumping world, Qatar nobility, and cornerstone of the country’s recent show jumping success. For his role in qualifying Qatar for its first ever Team slot in Olympic Show Jumping, the country has named him their flag bearer. Qatar has 38 athletes in 10 sports at the Rio Olympics.

According to his bio from the Longines Global Champions Tour, ” Abdelkebir learned to ride as a boy with the Moroccan Royal Family. “I was raised as her own son by Princess Lalla Amina of Morocco.” He started riding competitively at age 14. The King of Morocco, King Mohammed VI, owns the horses Ouaddar uses for training and competitions, and is an aid during his international travel. “King Mohammed VI puts everything at my disposal to make me feel at ease. First class tickets and everything you need. I’m really lucky, I can say that I am treated like a king too.”

Jeroen is one of the winningest equestrians in history, having claimed an Olympic gold medal at the Sydney Olympics in 2000, and also the world champion gold at the World Equestrian Games in Normandy in 2014. He was also on the gold medal-winning teams in 2006 and 2014. He has been a dedicated horseman all his life and is known as much for his compassionate and skilled advocacy and methods as he is his success. He also spends much of his time mentoring up and coming riders and serving as an ambassador for the sport.

The Netherlands has 239 athletes in 27 sports competing in Rio, so Jeroen’s selection is truly a tremendous honor not only for him, but the whole sport.

Isheau has earned this tremendous honor for the country colloquially known as Taiwan (for policy reasons, they must go by Chinese Taipei in international competition) by becoming the first athlete in the country’s history to earn a slot in the equestrian contests of the Olympic Games. 27-year-old Isheau is currently based in the Netherlands and has been riding internationally for several years. She clinched her spot last August at an Olympic qualifier in Hagen, Germany. There are 58 athletes competing in 19 sports from Chinese Tapipei.

Congratulations to these four incredible athletes for making the equestrian sports proud on the world stage! We’ll be watching for you tonight.