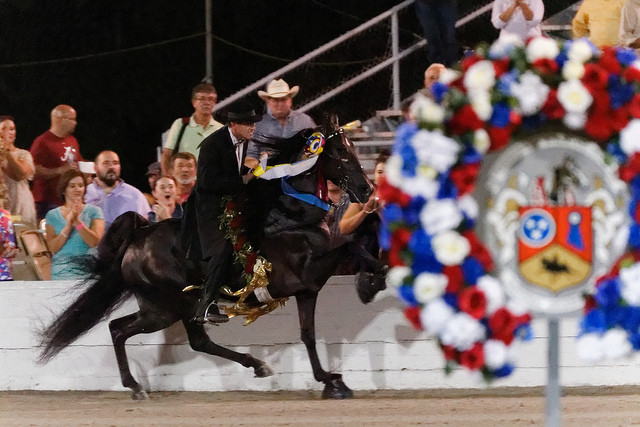 Candace Wade has the scoop.

The equestrian internet has been on fire on both sides of the Tennessee Walking Horse (TWH) soring issue since July 25, when the Animal and Plant Health Inspections Service (APHIS), a department of the United States Department of Agriculture (USDA), issued their proposed rule to strengthen the Horse Protection Act of 1970 (HPA).

APHIS Administrator Kevin Shea stated, “The recommended changes will ultimately help us end soring altogether by giving USDA direct control over the inspection process, and banning the use of certain equipment and training devices allowed under existing regulations. We believe an independent pool of APHIS-trained inspectors, combined with a ban on inhumane training methods, will be a more effective deterrent to the cruel and inhumane practice of horse soring.”

Recommendations came after lobbying on both sides of the issue. Many groups and individuals who support the big lick industry participated, as did the mainstream horse industry groups and veterinary organizations such as the American Horse Council, American Association of Equine Practitioners and American Veterinary Medical Association.

The Regulatory Impact Analysis and Analysis in Support of the Certification states that the rule “will not have a significant economic impact on a substantial number of small entities.”

The Tennessee Walking Horse Breeder and Exhibiters Association (TWHBEA) in Lewisburg, TN stated the following on July 27, “The proposed rule is clearly an overreach, typical of today’s Washington, and an overt effort to bypass Congress. In order to appease radical animal rights organizations, USDA is refusing to objectively look at the facts and instead implementing rules that are not based in science or reality.” TWHBEA claim that veterinary experts at Auburn University (1978 – ’82 study) and University of Tennessee support their view that the enhancement equipment (pads) does not harm the horses. They state they are funding their own study.

Response from Supporters of the Proposal

The Humane Society of the United States (HSUS), All American Walking Horse Alliance (AAWHA) and others have been posting energetic support.  Friends of Sound Horses (FOSH) shared via Facebook, “We’re rejoicing in the streets! The USDA has taken the next step in issuing regulations that will substantially reduce or eliminate soring.”

What’s Happening With the PAST Act 2015?

The PAST ACT 2015 (Prevent All Soring Tactics) is a bill in Congress aimed at closing the loopholes in enforcement of the HPA.  The PAST Act is endorsed by nearly all sectors of the horse industry, veterinary community, animal protection organizations, law enforcement and many in the walking horse show world. It has bi-partisan co-sponsorship of 263 members of the House and 49 members of the Senate. Click for a 2015 list of associations that support the PAST Act.

The first bill was introduced 2013/2014 with no vote. It was reintroduced in 2015. A small number of federal legislators have been successful in blocking the bill from coming to a vote. The bill continues to flounder in Congress. The APHIS/USDA proposal is seen by some (on both sides) as a way around Congress.

How to Participate in the APHIS Process

Regulations.gov has been created for the public to read the amendment document (Docket ID: APHIS-2011-0009) and voice their opinions. APHIS has planned public meetings to seek additional comments and feedback from the public. Those meetings are scheduled for the following dates:

All meetings will be held at 9:00 a.m. local time. Register to speak online or 30 minutes prior to meeting.

I’ve personally observed the results of the action apparatus in my series “Saving Theo.” I have been exposed to other post-big lick horses that required rehabilitation. I have listened to farriers and veterinarians experienced in treating show horses. I have stood in the breezeway of a training barn next to horses standing off-balance in stacks. I support the proposal as an inducement to return the TWH to the uncontrived gait that is the foundation of the breed and to encourage the TWH industry to adopt humane training and show standards.

[USDA Proposes Changes to End the Inhumane Practice of Soring]