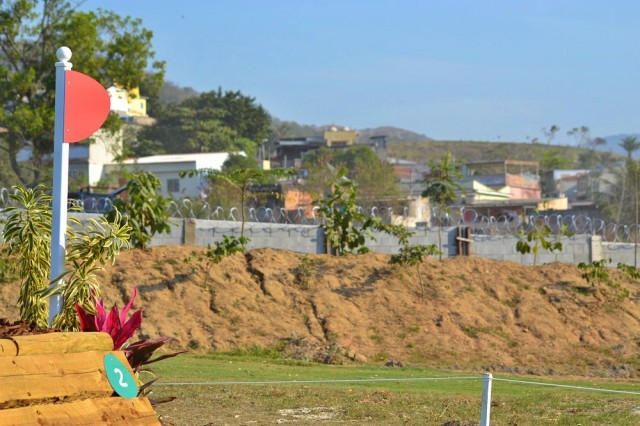 On the eve of the 2016 Olympic opening ceremonies, we take a look back at Leslie Wylie’s coverage of the 2015 Olympic Test Event in Rio as she contends with a vibrant but troubled city fraught with contradiction.

There has been probably never been a safer time to visit Rio de Janeiro than right now. The city is on lock, all law enforcement hands are on deck, and the baddies have been paid off to go “hang out in the hills” for a few weeks.

When EN’s Leslie Wylie visited Rio for the Aquece Rio Olympic Test Event one year ago, however, it was just some random week in August. In this piece, originally published on Aug. 11, 2015, Leslie takes a hard look at the real Rio, a vibrant but troubled city that is fraught with contradiction.

On Saturday afternoon as I was finishing my cross-country report at the Aquece Rio Olympic Test Event, an event official walked into the press center and told us we needed to leave.

She glanced down at her watch. “Now.”

As we made our way to the shuttle used to transport media from the Olympic Equestrian Centre to our hotel about 40 minutes away, a Brazilian journalist filled me in. In a nutshell, Rio police had just shot and killed a major drug lord (alias: “Playboy”) and there was some worry that there may be retaliatory gang violence or riots.

A fleet of armored military vehicles screamed past as we climbed into the bus. I hunkered down in my seat, trying to channel my inner Anderson Cooper, but the Brazilian seemed nonplussed. She shrugged: “This sort of thing happens all the time.”

As you’d expect for a city with some 12 million people, Rio de Janeiro is a patchwork quilt of social, political and economic diversity. And it’s prone to ripping at the seams.

We’re staying in Centro, the center city business district, a bustling hive of commerce, fast-walking people and honking cabs propped up against a hazy backdrop of craggy bluffs. They tell me that even here it’s dangerous to walk around alone, but there are worse places to hole up than our hotel.

You don’t have to wander far, though, to see — or hear — the other side. That night I was awoken by a series of deep booms followed by the sound of sirens. Related or not, it was a reminder that in Rio, you’re always closer than you think.

Rio’s favelas, or slums, are everywhere. The hills surrounding the city are covered in what look like shabby shoeboxes piled atop one another, as though stuck together with bubble gum. I snapped some photos on the shuttle ride to the venue:

There are over 600 favelas in Rio alone, many of them controlled by drug traffickers or militias. There’s been an effort in recent years to reclaim them; “Playboy,” for example, had been driven out of his territory and was in hiding when the police caught up to him this week. But to quote another local I spoke with this week, “Rio is complicated.” The lines between the good guys and the bad guys are blurred, and there’s widespread animosity toward the city’s notoriously corrupt police.

First-World Sport in an Emerging Nation

Rio isn’t all shades of grey. At the Olympic Equestrian Centre, for instance, the dividing line between upper-crust equestrian sport and abject poverty is a wall — literally. I joked about it in my cross-country course walk post — “Don’t worry, that concrete wall topped with razor wire isn’t part of fence #2” — but it was nervous laughter. Humor tends to be my modus operandi when I find myself face-to-face with dark, deeply troubling questions. Sometimes you just run out of words.

The last leg of our daily commute winds through the military base upon which the venue is situated. Each morning I am surprised once again to see tanks and camouflage-wearing, gun-wielding soldiers by the dozens walking alongside the road. A handful of them guard the gate to the venue, carrying riot batons and wearing the hardened expression of sentinels who know they aren’t just there for decoration.

Inside the Olympian Equestrian Centre, however, the atmosphere turns clean, bright, even cheery. Between the relentless sunshine and the familiar setup that every eventer knows by heart — dressage letters in their right place, start box a facsimile of a hundred other start boxes, show jumps in familiar shapes and crayon-box hues — you could almost trick yourself into believing that you’re at an event in Ocala or California.

Until you run into this kind of thing on cross-country:

Can Rio handle the 2016 Olympic Games? Brazil has pulled off major international sporting events in the past, most recently the 2013 FIFA Confederations Cup and 2014 FIFA World Cup, so we know it is capable of stepping up to the plate. What seems to have gotten lost in translation, however, are the grim details.

Both championships were plagued by controversy. Protests that began in 2013 against a bus fare increase quickly evolved into a panoramic condemnation of injustice: social stratification, systemic corruption and, last but not least, the massive amount of public money being spent on new infrastructure for the FIFA events.

Two million people took to the streets in the the months leading up to the Confederations Cup, resulting in at least 10 casualties, 250 injuries and 650 arrests. Urban riots were the background noise of the Cup, reaching a fever pitch when protesters clashed with police during the final match, Brazil vs. Spain.

As Rio and other host cities across Brazil neared the 2014 FIFA World Cup, public dissent lost steam but gained focus. This time all fingers were pointed at the World Cup, specifically the government’s spending of billions of reais on new stadiums coupled with allegations of shady backdoor dealings. It flew in the face of Brazil’s struggling economy and, to make matters worse, some of the country’s poorest citizens were displaced by new construction.

There were more than 20 protests and 180 arrests across various Brazilian cities during the first week of the World Cup alone. As in 2013, the grand finale came on the last day when military police corralled hundreds of Rio protesters in an to keep them from Maracanã Stadium.

This isn’t meant as a scare piece. (Although I’m probably not doing Jenni’s anxiety levels any favors as she prepares to cover the Olympic Games next year.) Despite its issues, Rio is one of the most colorful, vibrant cities in the world, a direct reflection of the majority of the citizens who live there. And it is clearly hard at work getting ready for the world to arrive on its doorstep.

During my stay in Rio, I quizzed several Brazilians about their predictions of how the 2016 Olympic Games will unfold. Nearly all of their appraisals were preceded by a sharp intake of breath and a pause, followed by a response that carried both skepticism and hope.

The criticism host cities face in the lead-up to an event on the scale of the Olympics has become almost cliche — remember last year’s Winter Games in Sochi? Yet when push came to shove, the chaos fell by the wayside. Taking its place: a once-every-four-years worldwide effort to set aside differences, at least temporarily, in the name of good sport.