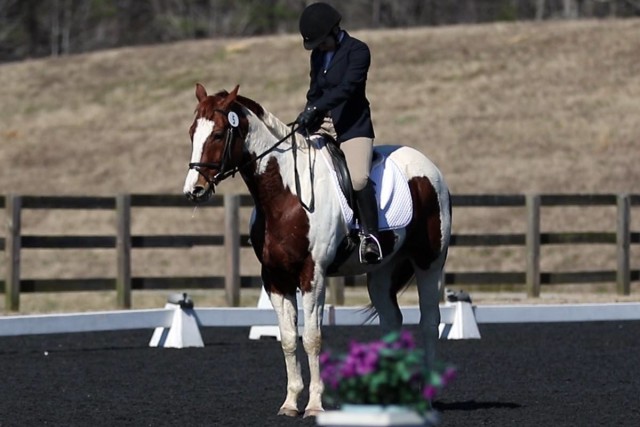 While columnist Ainsley Jacobs’ horse JJ is healing from a ligament injury, we’re revisiting some of her past lessons learned — like her personal best event, coming right on the heels of a memorable spill.

Now that’s a halt! We scored our very first perfect “10” on a movement! Video capture by Erik Jacobs/P.TEN Marketing.

My already fragile confidence had taken a hit after I fell off during stadium last week at the USEA-recognized event at Poplar Place Farm. I had planned on showing Novice 3-phase at this past weekend’s schooling show, but thought it would be wise to back down to Beginner Novice just to make sure we didn’t have a repeat performance.

I’ll admit, I was nervous. Things had been going really well for me and JJ lately, and I was surprised by the setback. We had a jump lesson on Thursday prior to the show and JJ was very enthusiastic. We didn’t have any stops, but I was still feeling a little shaky. Going into the weekend, I tried to push those feelings aside and focus on the import thing – staying on, staying safe, and having fun with my awesome Go With It Farm team.

Friday we hauled down to Poplar as usual and got to work with our typical routine of setting up stalls. Our group tacked up and headed out to school our XC courses. I was pleased to see that mine was mostly the same as last weekend’s, which I didn’t get the chance to ride. My trainer, Halliea, let me decide if I wanted to school the whole course or go one jump at a time. I put on my big girl pants and decided to go for it … we popped over our Beginner Novice #1 to warm up, circled back to hit the Novice #1, and things were going so well that we just continued on through the course.

Except for a stop at the up bank where the footing was really odd, JJ ran it flawlessly and gave me a perfect performance. I wasn’t quite sure where I was going since we hadn’t walked this exact Beginner Novice course, so I was finding my jumps as we ran, and I accidentally added in an extra one that wasn’t flagged. Bonus! After we crossed the finish, we circled back around to hang out with the rest of the group as they schooled their jumps and I let JJ enjoy some happy grazing time. I had a feeling we’d be fine the next day so long as I could just stay on.

Saturday morning was chilly, and fortunately, the show was small enough that the organizers decided to set the start time to 9am. Our first ride wasn’t until noon, so I spent the morning hanging out and helping with whatever anyone needed. Eventually, it was go time. I tacked up JJ with our dressage gear and walked down to the warm-up to start getting him in focus mode. We did a quick 15-minute work, and the show was running ahead of schedule, so I decided to just go on in and get my test over with.

We rode Beginner Novice Test B and JJ gave me some really lovely movements, and he didn’t feel as resistant as usual. I didn’t think it was great, but I was satisfied overall. My trainer, however, couldn’t stop smiling and told me she thought it was my best test ever!

Two hours later, it was time for stadium. Ironically, the same exact jump that JJ ducked out at last week and I fell off was in the same exact place this week, except now it was part of a two-stride combination whereas last week it was a single obstacle. We began working up in the hectic warm-up arena, and as we went by “The Jump” (which was parallel to the warm-up area) JJ spooked at it, hard. I gave a “that is not the answer, buddy” crop smack, leg yielded him towards it, and made him go by it several more times until he realized the jump was not, in fact, going to eat him.

Our warm-up went well, although JJ was feeling unusually strong. When we began our course, I was just hoping to be able to point him in the (generally) right direction and hang on through whatever distance he gave me, since I wasn’t having much luck in communicating to him what I thought was best for us. I planned to just go one jump at a time, keep my shoulders back, my leg under me, and pray that the horse show gods were merciful. Eleven jumps and just over a minute later, we crossed the finish to stop the timers with me still on JJ’s back! YES! Success never felt so good!

With confidence bolstered from stadium jumping, we went up to the barn so that I could grab my XC gear then headed back out for our third phase of the day. My trainer’s beautiful 7-year-old daughter, Sidnee, was riding her very first dressage test at the time (which I am super bummed I didn’t get to see in person!) so I just hung around in the XC warm up area waiting until they had finished. Unfortunately, the way the timing worked out, I had to start my warm-up without my trainer.

Ironically enough, I was more scared of doing my warm-up jumps without Halliea’s consent than I was of the course itself. I didn’t know if she would be okay with me not waiting for her, but my ride time was coming up and the starter wouldn’t wait, so I had no choice. With less than two minutes until my ride time, I tried to tell myself what she’d tell me if she were there. I popped JJ over the warm-up cross rail, the vertical, the oxer, the hanging log, then booked it over to the start box. The starter began my 10-second count down, I started my watch, and suddenly we were officially on course – on our own.

JJ was in BEAST mode the whole way through, and although I was super proud of how full of “go” he was, and how game he was for every obstacle, there were moments where I had to remind him who was in charge (me, I think?). We had to come to almost a complete stop for a reality check – twice – and do some trot sections to calm the heck down, but he said “Yes!” to every question and carried me through the gallop stretches and a crazy fast pace. Interesting note: when we got to jump #11 of 14, I still had 2:20 left on my watch before optimum time. Fortunately, we worked together well enough to add in some circles to kill time, and crossed the finish about twenty seconds under optimum, with no jumping penalties. We had survived.

Back up at the barn, JJ got lots of “good boy” cuddles, treats, and his dinner. Halliea got back from her own cross country run and – thankfully – wasn’t mad at all that I had warmed up and started my course without her. She had checked my dressage score earlier in the day and proudly told me that JJ and I had scored a 27.75! My reaction was to ask “was the judge watching the wrong horse?!” HA! I couldn’t believe we had done so well! We were always mid-30s at best, so to be in the 20s was simply incredible.

Once the scores were posted, I went to check out final placing. I was THRILLED to see we had finished second, just 0.75 points behind first, with our official new personal best of 27.75. When I opened my dressage test to read the judge’s comments, I got a shock – we had scored a PERFECT 10 on our halt! WOW!!

27.75 – a new personal best for us! Photo by Ainsley Jacobs/Ride Heels Down.

The best part of the day wasn’t the pretty red ribbon or the incredible “10”, it was the fact that we conquered yet another fear-obstacle and made more progress towards rebuilding my confidence.

Leave your past in the past – a poor performance does not mean you won’t succeed in the future! That said, make sure your horse sees the “scary” jump before you start your course so you’ll have less of a chance of him spooking at it.