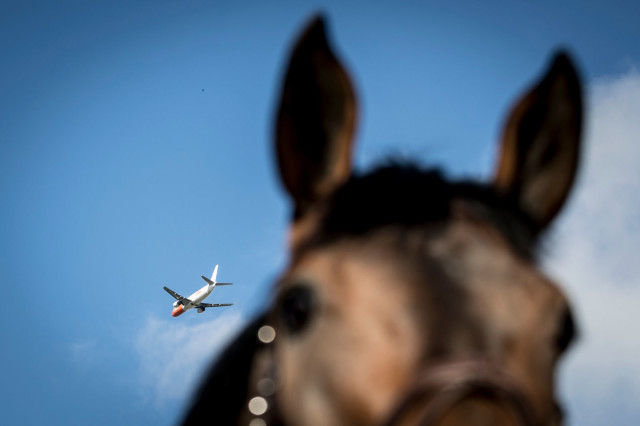 Organizing the international travel of hundreds of equine athletes and all of their associated feed, tack and equipment is no small feat. Get a behind-the-scenes look at how the Olympic horses traveled to Rio!

This story was originally published on our sister site, Eventing Nation.

The first groups of Olympic horses have been arriving in Rio over the weekend from all corners of the world. Team USA eventers took to the skies out of Miami, Florida on Friday and we’re happy to report that the horses and riders have all arrived safely.

Getting the world’s top dressage, show jumping and eventing horses to the Olympic Games is no small undertaking. Besides the necessary delicate handling of live animals, there are thousands of pounds of baggage and gear to organize and transport, too.

The FEI’s Jon Stroud followed along to the London Stansted Airport as 34 Olympic event horses from ten nations were loaded onto an Emirates SkyCargo Boing 777-F and captured some awesome shots of the equestrian world’s most precious cargo settling in for the journey. 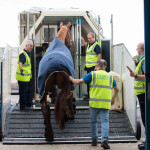 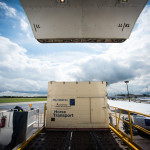 The horses travel two to a pallet, each with their own stall with plenty of food, water and hay. Photo by FEI/Jon Stroud. 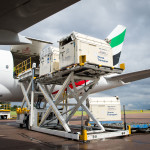 Not quite the same as walking up a ramp into a horse trailer! Once loaded into their stalls, the pallets are hoisted upward and transferred to a temperature controlled cargo hold. Photo by FEI/Jon Stroud.

When it’s all said and done, more than 200 hundreds will have departed from London on nine different flights and make the 12 hour flight to the Rio International Airport en route to the Olympic Equestrian Centre in Deodoro Olympic Park. More horses will fly from Liege Airport in Belgium.

By necessity, sending a horse 30,000 feet in the air and touching down in another part of the world is a highly organized affair. First things first, each horse must have a passport, microchip and health certificate, and a veterinarian will check them over carefully before they begin the loading process. 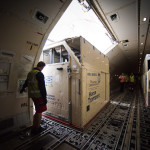 Over 38,000 pounds of horse flesh flew from London to Rio in the first shipment. That’s not including all their gear, which weight over 21,000 pounds. FEI/Jon Stroud. 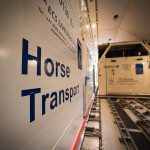 The horses are so used to traveling, they don’t actually know they’re on a plane high in the air. Photo by FEI/Jon Stroud. 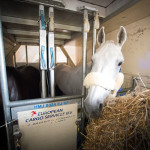 All tucked in and ready to fly! Rio here we come! Photo by FEI/Jon Stroud

The FEI reports that each horse has an allocated baggage allowance by weight for feed, hay, bedding and equipment plus the weight of the horse itself. In their “stall,” the horses are allowed 40 litres (about 10 gallons) of water, a large haynet, a personal bucket and a small bag with a spare halter and rug.

The Emirates SkyCargo Boeing 777-F aircraft is a freight plane especially equipped for equine transport. The Olympic horses are traveling two to a pallet in stalls that are 44 inches wide. The staff aboard the aircraft are trained to fly with horses and ensure their safety and well-being throughout the flight and of course there is a vet on board.

See you in Rio!