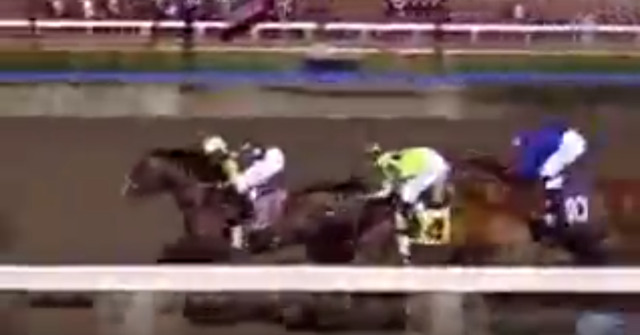 Hint: it’s not the race winner.

Watch this race from June 29, 2007 at Hollywood Park — just a generic maiden claimer — and see if you can pick out the horse that is on his way to Rio to represent the United States at the 2016 Olympic Games:

“Red,” as the horse is nicknamed, competed first with Lisa Peecock, then Kelly Prather, before joining Boyd Martin’s stable in the summer of 2015. Together Martin and Red conquered the horse’s first four-star, finishing in the top 10 at Rolex with Red emerging as the strongest horse in Martin’s lineup and ultimately becoming the selection for the 2016 Olympics.

We’re thrilled to see an American off-track Thoroughbred competing at the highest levels of equestrian sport on one of the most visible stages in the world. Best of luck to Boyd Martin and Blackfoot Mystery — don’t miss our sister site Eventing Nation for up-to-the-minute coverage, with our own Jenni Autry reporting live from Rio throughout the eventing portion of the Games!