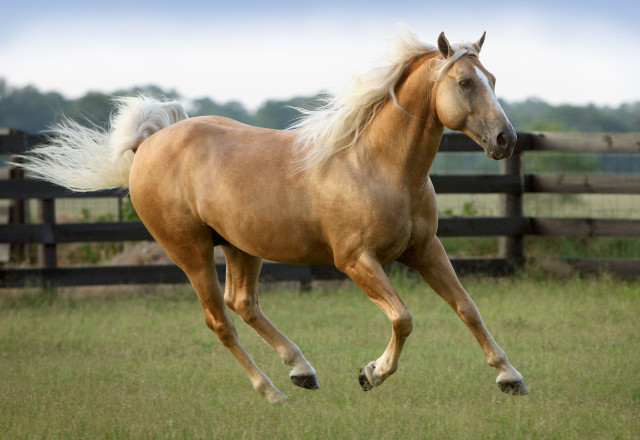 Ivory Pal has starred on magazine covers, served as a product spokeshorse and shown the world what Tennessee Walking Horses can do without soring and stacked shoes. Candace Wade catches up with Ivory Pal in his semi-retirement.

Ivory Pal is the blond bombshell Tennessee Walking Horse (TWH) that graced the covers of Equus magazine in 2011 and 2008, Horse Illustrated in 2011, Horse and Rider in 2009 and Equine Wellness in 2005. The palomino was a centerfold in Horse Illustrated in 2008 and could be found in Equus Caballus. As a product spokes-horse, he is an ambassador for Omega Fields Horse Shine. Numerous books and calendars have featured Ivory Pal.

Now semi-retired at 19 years old, Ivory Pal performs for children and veterans and with another celebrity, actress and supermodel Jennifer O’Neill. O’Neill is the creator of the Hope and Healing at Hillenglade (HHH) program to support veterans suffering from post-traumatic stress disorder.

Owner and trainer, Rafael Valle, shares his views about Ivory Pal’s early years as a big lick Tennessee Walker show horse. Valle was looking for a good trail horse when he walked the aisle of a show barn in Florida. He was drawn to the golden boy standing in his stall.

Ivory Pal was for sale because the 4 year old stallion refused to perform the big lick – unusual stubbornness for a compliant breed like the TWH. Valle reports, “Ivory Pal refused to perform with the pads and chains. [His] intelligence and pride were his ticket out.”  Not knowing if, as he put it, the stubborn, performance show reject would agree to be a trail horse, Valle was hooked by an instant connection with Ivory Pal.  That connection has sustained to the present.

Not only will Ivory Pal never wear stacked show shoes again, Valle has been able to keep the horse without shoes at all. He has also trained Ivory Pal to be ridden and perform without a bit. This is a big change from the levered, long-shank curb bits used in the shows. Ivory Pal is an example that stars can be sound-health role models.

Four years under Valle’s care and training later, Ivory Pal was the first barefoot Tennessee Walking Horse to win the High Point and Versatility Championship at the 2005 North American Gaited Horse championship in St. Louis. Valle had a mysterious phone threat the week prior to the show — “If you show up with Ivory Pal, we are going to hurt him.” Valle was quick to respond with, “If anyone touches Ivory Pal, he will regret ever having been born.” A guard and security plan aided by volunteers kept the stallion safe throughout the show.

Valle’s decision to keep Ivory Pal bitless and barefoot was to demonstrate the versatility of a sound, naturally gaited TWH. He states, “they can and will perform bitless and barefoot with humane treatment and training.” Ivory Pal’s owner has trained him to perform some showy moves like a basic Spanish-style walk, a moving turn on his haunches, plus on-cue bowing and rearing.

Audiences are delighted by the team of Ivory Pal and Valle. They see that a TWH can be willing to move and show by using leg pressure like any other horse. Valle adds, “We are not only targeting the TWH world, but also the general horse world to expand the popularity of the TWH and overcome the damage that the big lickers have done to the image of this amazing TWH breed.”

Ivory Pal is also a devotee of the treeless saddle to help keep his back healthy. Valle reports, “I went through many saddles that did not properly fit Ivory Pal and were making his back sore. The treeless saddle adjusts to his body, letting him move freely, and gives me close contact.” For Valle, a good pad is fundamental to distribute the rider’s weight. “I use The Corrector pad, invented and designed by Len Brown. The combination of a treeless saddle with The Corrector pad keeps Ivory Pal’s shoulders and back loose. The key is to always listen to and evolve with what our horses are telling us.”

Maintaining his physique is a lifestyle for Ivory Pal. After early years confined to a stall as a show horse, Ivory Pal now gets a consistent workout by free grazing. Valle and Ivory Pal share time out on the trail to keep tuned up.

What Is Ivory Pal Doing Now?

Many celebrities have gone the book route: Cindy McCauley has done this for Ivory Pal in the 2012 biography, Ivory Pal: Born to Fly Higher. His fame has blossomed on social media with a Facebook site that boasts close to 175,000 fans.

Ivory Pal is spending more time simply enjoying being a horse with his gelding buddy out in the pasture. His over-the-fence herd includes his mare and their colt and filly. Valle muses, “I had to separate the mare and filly [from Ivory Pal] as I don’t need any more babies.” Now weaned, the colt hangs with his pop and the gelding.

Ivory Pal and Valle still practice the crowd-pleasing moves for select exhibitions. Ivory Pal came out of retirement on July 2, 2016 with a featured performance in a July 4th celebration for veterans suffering from PTSD and their families. Jennifer O’Neill sponsors the annual patriotic event at her Hope and Healing at Hillenglade in Nashville. O’Neill and Ivory Pal joined forces to bring an emotional vacation day to the veterans and their families. Not only did Ivory Pal earn applause with a performance ride that included patriotic costuming and a musical score that was on target for the audience, he gave rides and was patient with hands-on meet and greets.

“The public embrace of Ivory Pal has been humbling,” says Valle. He has journeyed from a big lick show reject to cover boy and spokes-horse for promoting the sound, barefoot, bitless versatility of TWH. Valle believes, “There is a better way than chains, pads, chemicals, whips and inhumane training techniques.” I paraphrase the philosophy of another TWH rescuer, “Ivory Pal shows that one can succeed in gaining a horse’s trust and confidence. He shows the power of love to transform a horse.” His beauty, heart and resiliency resonate with the youngsters and the mature-sters. Ivory Pal’s star continues to shine.