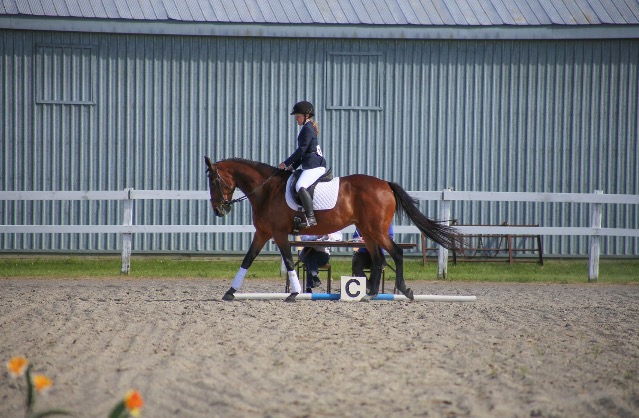 Thoroughbreds aren’t the only horses coming off the track in need of new careers: reader Jaci Payne shares her experience with Crimson Jiffy, a retired Standardbred pacer who transitioned to a second career as a show horse.

I met Crimson Jiffy in the middle of university in 2011. I hadn’t planned on owning a horse while studying, but after a couple of rides to help out a family friend, it became clear she didn’t have the training needed and she became mine. I started her training under saddle and she learned quickly. Jiff raced until she was 6, but did not have an impressive record, amassing only $8,000 in her career.

Jiff easily transitioned from pacing to trotting, and within months, we entered our first show on the Ontario Standardbred Show Series. She placed in a couple of classes, and handled the commotion of showing like a seasoned professional. As her training progressed, Jiff gravitated toward western speed events and began to excel, but it was too hard on her body so we changed our focus to dressage.

The following year, Jiff would be the 2013 Western Dressage Champion on the Ontario Standardbred Series, and in 2014, Jiff and I were Silver Champion English Performance, In Hand Champion, Silver Champion Western Performance and won several other awards. We also won the High Point Versatility Award, which was very exciting!

That year, Jiff and I traveled with several other Canadians to Ohio for the World Standardbred Horse Show, where Team Canada had a very strong showing with Michelle Bohrer winning a Reserve World Champion Horsemanship as well as Western Pleasure on Just Jate; Jessica Allen picked up the World Reserve Western Dressage Championship on Clear Xample and Jiff and I won World Championships in both Classical and Western dressage, receiving the highest score awarded in both divisions.

Jiff was shown very lightly in 2015, but has already started 2016 off with High Point Overall at Standardrama in Orono, Ontario. Jiff and I will continue to show on the Ontario Standardbred Show Series because the group is inviting, fun, positive and supportive. The shows are a testament to the gentle nature and versatile athletic ability of the Standardbred, where you often see one horse compete in English, western and driving classes, all in one afternoon.

One of my favourite things about Jiff is her willingness to give her all in whatever I ask. Her show days typically start with dressage tests at 8 am, and she is still sharp and eager at 5 pm when the driving classes are wrapping up. Jiff is a shining example of the heart and work ethic that is bred into Standardbreds generation after generation, along with the athleticism that allows them to fly around the racetracks in their first careers.

While the canter is penalized in racing, many Standardbreds quickly learn to pick up their leads and hold a steady three beat canter with a rider. Their athleticism and exposure to busy atmospheres and noise, as well as extensive traveling while racing, make them naturals for showing. If you are looking for your next horse, whether it’s for the show ring or the trails, consider a Standardbred!

There are several groups in Ontario and beyond promoting Standardbreds as sport horses, and adoptable Standardbreds can be seen at the following:

Is it “Your Turn”? We love sharing reader submissions — email yours to [email protected].