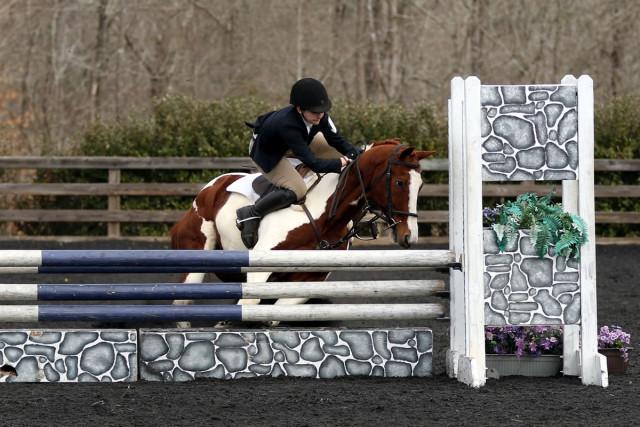 While Ainsley Jacobs’ horse JJ is healing from a ligament injury, we’re revisiting some of her past lessons learned — like this particularly memorable moment from earlier this spring!

Pictures can be deceiving! We may look pretty perfect here, but I fell off just a few jumps later. Photo by Erik Jacobs/P.TEN Marketing.

Yeah yeah, I know that’s a pretty Negative Nancy blog title, but don’t give up hope for happiness just yet! February 6-7 was our second-ever USEA recognized 3-phase event, and just like the first time around, we were disqualified due to me falling off. So, yeah – I’ve now fallen off at 100% of the recognized events I’ve (tried to) ride in, and I find that pretty funny!

After having several successful months in a row of Beginner Novice 3-phase schooling shows (as well as a successful Novice 3-phase schooling show), I decided to try the USEA recognized event stuff again. JJ and I have made *huge* progress in our teamwork, and in our cross country, so I figured it wouldn’t be too terribly difficult to simply survive it. My only goal was to stay on and avoid a repeat of our first recognized event, but as is so common with eventing, things didn’t quite go as planned.

Truth be told, I wasn’t nervous about this event at all. If anything, I was the most relaxed I had ever been prior to a show! JJ had a visit from our wonderful chiropractor, Holly Breaux, DVM on Thursday, and on Friday, the Go With It Farm team trailered down to Poplar Place Farm. Due to the class being split by age rather than horse/rider/etc designation, I wound up in Open Beginner Novice.

Friday morning our girls arrived in good spirits, and everyone had fun hanging out and braiding our pretty ponies. We began our dressage warm up that morning, and JJ was feeling s-p-e-c-t-a-c-u-l-a-r! He was so soft and responsive and light and lovely and, well, I couldn’t stop smiling. Thirty minutes later, we entered at A and had (what I thought was) a really nice test! I was pleased, my trainer was pleased, and JJ seemed pleased. Turns out we scored a 40.0. Definitely not our worst, but nowhere near what I had expected… that’s okay, though! There was still plenty of time to move up during stadium and cross country in the class of 16 riders, or so I thought.

That afternoon, I got JJ all fancied up for our stadium round and checked that all his tack (including his martingale) was in place. We wandered down to the warm up arena, loosened up, and took a few pretty perfect practice jumps before heading into the arena to start our course.

The course had a few difficult turns and roll backs that had been causing problems for a few riders, so I had a plan of what path to take to avoid those issues. We started strong and had some really lovely jumps through the first half of the course. We nailed the tricky jump #4 that had been taking people out like it wasn’t even a thing! We had a little argument about pace and balance coming into #7, but got over it and headed towards #8.

We approached #8, which was on the long side of the arena parallel to the slightly chaotic warm-up area, and JJ locked on to the jump. It was an oxer, and I was working to keep him balanced, upright, and listening. I had my trainer in my head reminding me to stretch tall, keep my shoulders back, and wait, wait, wait … we neared the jump, everything seemed perfect, and suddenly – BAM! I was on the ground! What?!?

JJ says: “Oh, look! Let’s go do that jump over there instead of this one!” 😉 Photo by Erik Jacobs/P.TEN Marketing.

Turns out, JJ added a small chip, then decided to duck to the left. Despite doing my best spider monkey impression, I wasn’t able to hang on and hit the ground. Fortunately, Poplar’s arena is squishy soft and my butt helped cushion the fall.

As a result of the fall, I got us disqualified and we were done for the weekend. I was SO bummed that we weren’t going to be able to run XC (as it seemed like a fun course) but SO happy that neither of us had gotten hurt in the incident.

I’m learning to handle the disappointment of “failure”, and I was really proud of myself for being able to shake off this emotional upset fairly easily. I’m starting to see things more as opportunities to learn more about what JJ needs from me as a rider (support, confidence, etc) instead of focusing on the fact that we had trouble. Rather than get angry, I just told myself “Hey, it’s better that this happened today when our dressage was mediocre than on a day where we had a great test and were in the lead!” There will be plenty more shows for us to have good days at!

Anyway, Sunday was a nice, low-key day for us since we weren’t riding. I spent the day taking care of JJ and cheering on my trainer and teammates as they finished up their classes.

Overall, despite going off, I actually had a lot of fun and met some great new friends! We’ll be back at Poplar next weekend for another 3-phase schooling show. I had planned to try Novice again, but I think I’ll stick with Beginner Novice for now and (hopefully) get some confidence back for both JJ and myself. Wish us luck and thanks for reading!!

When your trainer tells you to make your horse stand in front of the jump when he tries to duck out in your lessons, she has a point. Eventually, rather than stopping in front of the jump, he’ll learn to run out, and you’ll wind up in the dirt like I did. If you get a stop, keep your horse in front of the jump (as best as you can), give a crop discipline, and turn him AWAY from where he wanted to go. Accidents happen, and riding is always unpredictable (that’s what makes it fun!) but you can unintentionally train in an undesired behavior that will come back to bite you in the butt during a very expensive horse show. Oops!