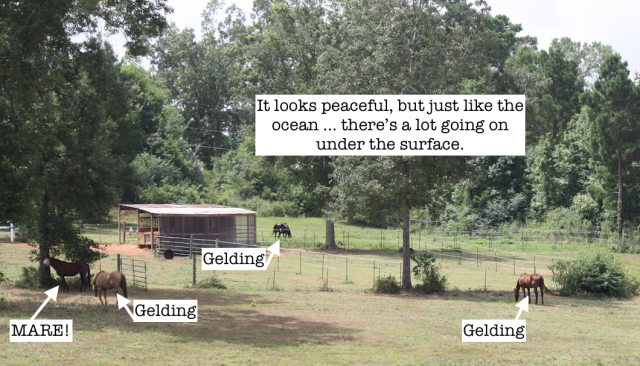 We’re new to this game and we’re just trying to survive.

A little over a month ago, I purchased a polo mare named Lumpy. She’s not the first mare I’ve kept — that honor is bestowed upon a little two-year-old filly I owned very briefly — but she’s the first that I intend on keeping long term. To say that she has shaken my herd’s dynamics is an understatement. Here’s a little peek at our life so far.

The day before I brought Lumpy home, my three geldings were living in all male serenity. There were plenty of scratches and farts to go around and everybody really only got excited when feed buckets were involved. No argument couldn’t be handled by a quick, “Dude?” and a reconciling fist bump.

The evening we brought home the new girl, everything went immediately sideways. First, there was a lot of creepy staring…

Lumpy’s been here all night, happily eating. The boys have just been staring at her like creepy creepers. #newhorse #horsenation #horsesofinstagram #LovelyLadyLump

Then the arguments began. It was super awkward, because everyone involved felt betrayed on some level.

Then every gelding picked a different tactic to woo Lumpy. Gumpert, my OTTB eventer, decided the best way to proclaim his love was through total devotion and self sacrifice. If he had opposable thumbs, he would have written her a haiku and tattooed her name on his chest.

Spiderman, my daughter’s horse, went the opposite direction. He charged around his private paddock — he had to be separated for everybody’s safety — flexing his muscles and making sure she knew he had a fantastic canter depart.

Aggie, my Alpha and ever the coolest, said hello and then acted like he could care less. Guess who heard that first, “Where are you going?” nicker?

After a week, everyone settled in. Lumpy dropped nicely into second on the herd hierarchy– behind Aggie, but well ahead of Gumpert who has taken up the role of “Lumpy’s lackey” on many levels. He even waits for her to come up from the far pastures before he does so himself. It puts him third in line to get meals, but he seems resigned to the new world order.

The peace was only just interrupted by her first heat cycle. Gumpert started writing sonnets — since the haikus didn’t work the first time around — while Spiderman has decided the best way to attract her is just to loom around their shared fence lines. You know, the old “right place right time” mentality.

Ironically, she still favors Aggie over the other two and he’s still ignoring her. C’est la vie.

How do you handle a mixed herd? Give me tips in the comments!

To keep up with all of Amanda’s horsey shenanigans check out her Instagram: