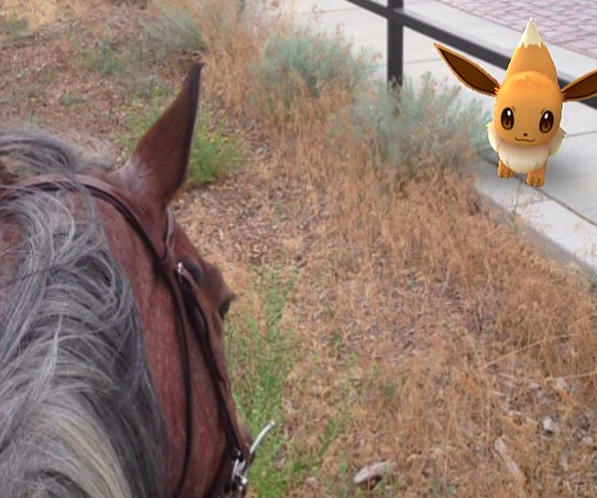 If only our horses were this bombproof when faced with actual wildlife.

In case your Facebook newsfeed or Instagram history isn’t full to the brim yet with friends sharing their Pokemon they snagged by walking around the neighborhood, we’re here to top it off with just one more example of worlds colliding.

For those of you still a bit behind the times, the hotly-anticipated Pokemon Go app game released last week, which turns players loose on their communities to “catch” Pokemon in the real world … on the screen. This combination of worlds is being called “augmented reality,” in that players must interact with their natural environment in order to play the game.

The premise is simple: travel around the world, catch and tame Pokemon, and battle other players (called trainers). That’s the same concept behind all of the previous incarnations of Pokemon — only this time, you’re literally traveling around to find these things. Players might need to go to a body of water to catch aquatic-based Pokemon, for example.

Gracie was getting into the Pokemon GO hype! Caught a Caterpie on her first attempt. #horsesofinstagram #horsenation #horsejunkiesunited #pokemongo #pokemon #pokemonhorse A photo posted by Amanda Moretz (@amandamoretzbodywork) on Jul 9, 2016 at 5:47pm PDT

We at Horse Nation profess to be tech-savvy individuals but we’ve got to hand it to you guys, keeping us old fart equestrian relevant. (We also should probably state for the record that we encourage complete attention to your surroundings and your steed whether you’re mounted or working on the ground.)

Earl is unimpressed by the Zubat #pokemon #pokemongo #horse #horsenation A photo posted by @rearingangel on Jul 10, 2016 at 4:12pm PDT

What a time to be alive. Go catch ’em all. Go riding.