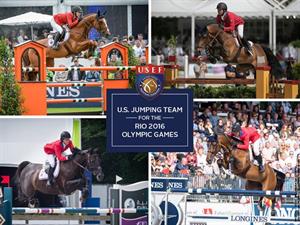 The US Olympic Show Jumping Team was officially named this morning by the United States Equestrian Federation, and will include the following riders:

Laura Kraut of Royal Palm Beach, Florida and Old Willow Farms, LLC’s Zeremonie, a 2007 Holsteiner mare, have been named as the traveling reserve.

This latest team announcement is the last of the three equestrian teams headed for the Summer Games, with the dressage team named earlier this week on Monday and the eventing team named last week on June 20.

We’ll be following all equestrian events at the Rio Olympics this summer, but for in-depth coverage of show jumping, please visit our sister site Jumper Nation and for in-depth coverage of eventing, don’t miss our sister site Eventing Nation. EN’s own Jenni Autry will be on-site during the eventing portion of the Olympics at Deodoro Olympic Equestrian Center in Rio de Janeiro!