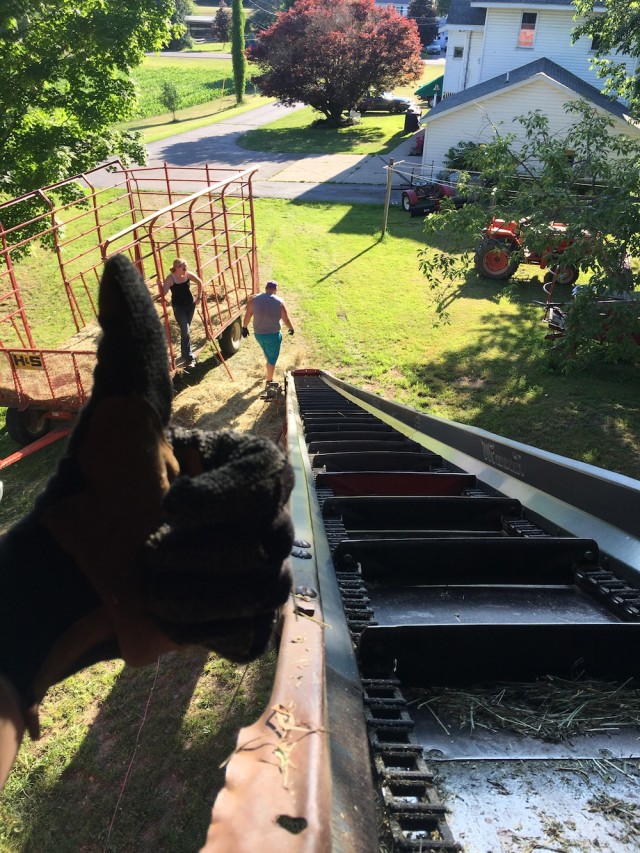 There are a few equestrian products that blur that line between necessity and luxury, blending the two qualities into one product that’s so perfect that you’re not sure how you got along before you discovered it. The Hay Bucker Pro glove by Noble Outfitters is one of those rare gems: I’ve thrown plenty of hay in my life with basic gloves, even bare hands — but now that I’ve seen the light, I don’t think I’ll be going back.

The Hay Bucker Pro glove is designed specifically for, well, bucking hay, but also for other heavy-duty farm jobs, and includes a bunch of features that make these things practically indestructible.

See what I mean about dancing across that need/luxury line? Think of every scrape, scratch, cut and flesh wound you’ve ever picked up during hay season; then think about how your average pair of gloves works pretty well, but could be better … Noble Outfitters has pretty much nailed it with these, the only hay-specific glove on the market. The only thing missing is the built-in bottle opener for cracking open a cold one when you’re all done haying at the end of the day.

I put these gloves to the test earlier this week when we filled my father-in-law’s hayloft. While my upper-body strength may not have been pulling its weight, the Hay Bucker Pro gloves certainly didn’t let me down. Usually, my biggest usual complaint with gloves is a reduction in dexterity combined with an increase in bulk that make me feel like I’m trying to function while wearing oven mitts. The Hay Bucker Pro, on the other hand (see what I did there?), with its silicone-added fingertip grips let me snag bales off the elevator with ease and attempt to gracefully wing them across the loft to my waiting husband.

I’m anticipating making great use of these gloves for other around-the-farm chores as well, such as helping to repair fence, moving equipment and supplies, and aiding in cattle husbandry. I anticipate that they’re going to be good working gloves when driving my draft horses for various farm chores as well.

While it’s generally not good form to gloat over loved ones, I have to admit that it was satisfying washing up for dinner without the usual burn and sting of the myriad of tiny cuts all over my hands … while my husband, who may have lightly mocked my gloves earlier in the afternoon, winced away over the sink. Don’t worry, I’ll get him his own pair.

The Noble Outfitters Hay Bucker Pro comes in sizes from small through extra-extra-large, and runs at $33.95. Check out Noble Outfitters’ full glove collection for plenty of other options in working or riding gloves!