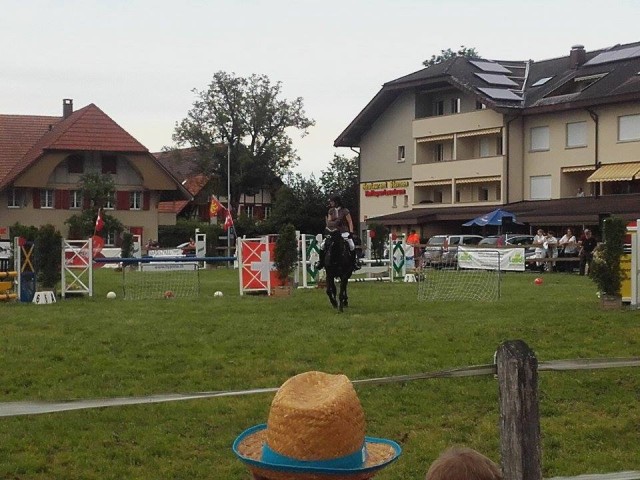 Erin writes: “I accompanied my trainer (in the video) to a local jumper show here in Switzerland: I live in North Carolina, but am half Swiss and got a great opportunity as a working student here. She showed a five-year-old mare in the 90cm division.

“What made this show special was the ‘joker’ option at the end of the course. In honor of the start of the Euro 2016 soccer tournament, riders had the choice to either jump a 1m jump with a small soccer goal underneath it, or dismount and kick a ball into a second goal set up next to the one under the jump.

“If you make the jump/score a goal, 10 seconds were subtracted from your total time. If you hit the rail/miss, 10 seconds were added. Riders went about 50/50 on the choice between the jump and the kicking, but more people made it over the jump than those kicking the ball scored. In the picture (above) you can see the second goal set up to the right of the goal jump on the left.”