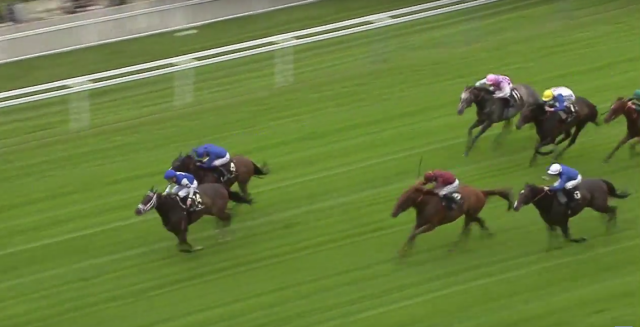 American mare Tepin traveled to England to run in the Grade I Queen Anne Stakes at Royal Ascot. Against some of Europe’s top male milers, she conquered a number of challenges for an impressive win!

Tepin is the toast of the international racing world this week after a statement-making performance at Royal Ascot’s Grade I Queen Anne Stakes. Compared to her usual American turf races, which are run on a flat oval track, the course at Royal Ascot was a straight mile with a hill — a brand-new experience.

Compounding this new challenge, European racing laws prohibit Lasix, a drug routinely administered to American racehorses to prevent exercise-induced pulmonary hemorrhage (EIPH) or called simply “bleeding.” Its use is controversial — some claim it is a performance-enhancer; others argue that it’s a drug used to treat a common condition. An estimated 90% of racehorses in the United States receive the drug on race day. Tepin is among them; the mare also typically wears a nasal strip. As neither are allowed in Europe, the five-year-old mare was racing without two of her routine tools.

Additionally, torrential downpours had softened Ascot’s turf, making the entire field work harder. A number of Europe’s top milers, including males, were entered in Queen Anne Stakes. Irish-bred and British-trained Belardo went off as the 9-2 co-favorite with French horse Ervedya.

As a straight race, the field settled into two packs on the left and right of the track before the leaders came together to duel for the lead. With a quarter-mile to go, Tepin began to roll under regular jockey Julien Leparoux, working her way to the front and taking the lead at the final furlong. Belardo made a late rally but could not catch the mare.

Owner Robert Masterson pointed to Tepin’s solid performance as an indicator that American horses could indeed run without drugs, a common criticism especially in international racing. Trainer Mark Casse mentioned that she would prepare next for the Breeders’ Cup Mile in the fall, which she won in 2015.

There’s no full replay available yet for the Queen Anne Stakes on YouTube, but you can watch the final drive to the wire below. Click here to open a separate site with a replay courtesy of Racing UK.