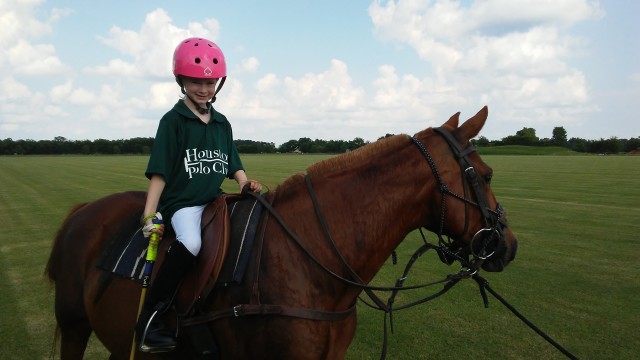 Amanda gives us the full report on her first outing as a “polo mom.”

My whirlwind love affair with polo began just a year ago as an experiment. The United States Polo Association contacted Horse Nation in need of a roving reporter to cover the U.S. Open in Wellington. By chance, good fortune or the strong winds of fate, I was chosen to be that reporter. A few weeks later, I signed up for polo school. A few months after that, I signed up for my first season of league play. This week, I just bought my first official polo pony. The rest, as they say, is history.

But this past weekend, I hit another milestone when my daughter signed up to compete in her very first polo tournament.

The weekend started in the hitting cage, where, after she swung a mallet for the very first time, I envisioned a life with my daughter becoming the next Sunny Hale. I took the requisite three thousand photos, like any proper mom, and even sent a few  to my polo trainer … just to let him know the next member of Team USPA was making her debut.

Getting ready for her lead line polo tournament this afternoon. #horsenation #polo #horsesofinstagram

Afterwards, I played in my 2-goal match. Obviously an expert by then, my little prodigy was a little pushy after the second chukker when my team was two points behind. I was greeted at the boards with arms raised, a quizzical expression and a stern, “What happened?”

Sorry to report, we made a valiant comeback but still lost by one point. Undeterred, Sydney said, “Well, it’s really about having fun.” I’m pretty sure she was just pandering to my bruised ego at that point, but I still approve of the message.

Later, we arrived at the fields and met Brandy, a cube-shaped chestnut mare that, for her height, required a surprisingly long girth. Sydney helped me groom and saddle Brandy, even attempting the complicated “Texas Mud Knot” used in polo horse’s tails during matches. Then it was time to ride. Sydney was only slightly mortified that I had signed her up for the Lead Line division. “But I want to do it myself,” she said. “That’s fine, but the rules say I still have to hold the rope,” I argued. She conceded the point with only a slight scowl.

The quibbles over who was actually steering Brandy passed to the wayside when play began in earnest. Particularly, I’d like to note, when she did an audacious double-handed nearside hook and dropped her reins completely. Her team was down a man and a point by halftime. Her and her remaining teammate rallied though, ending the day tied 2-2.

The next day we woke bright and early for another round of play. Syd, ever the pro, used the fifteen minute drive from our hotel to the playing fields to power nap.

Still down a man on our team, we knew we had a lot of work to do. Sydney executed a gorgeous knock in from the goal line…

And a beautiful neck shot to goal with only a tiny bit of help from Momma. Honestly, it was allowed and encouraged … I swear.

We ended the day in another tie with a final score of 4-4, which was actually kind of perfect.

All in all, I couldn’t have asked for my daughter to have a better introduction to the sport I’ve grown to love. Everyone was there to have a good time. Everyone cheered for everyone else’s kids. There was a pizza party and a water slide. There were prizes, quite literally bucket loads of prizes. Sydney won more swag during this event than I’ve won in the last decade.

Still, every kid I spoke with was really only there for the love of horses and love of the game. Jose Jr., one of Sydney’s opponents, woke his dad at four in the morning with one statement, “I’m ready for polo.”

For more information about polo and the National Youth Tournament Series check out USPolo.