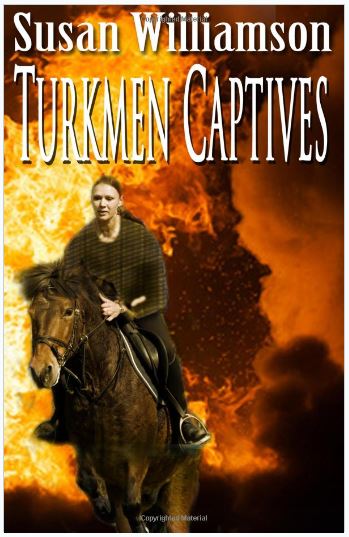 Turkmen Captives by Susan Williamson is a fast paced thriller that crisscrosses the globe, from the east coast of the U.S. to Ireland to Turkmenistan and back again. It’s told through the eyes of Madelaine Jones, a widow in search of answers about her husband’s death while deployed in Afghanistan.

The book wastes no time in getting to the action, as Madelaine is nearly killed twice in the first 20 pages of the book. In conjunction with the mysterious fire that destroys her home, our heroine gets word that her husband’s death may not have been an accident as she had been told by the military. Madelaine, with nothing left to lose in the world, decides to embark on a quest for answers about what really happened to Jim, what he was working on in the months leading up to his death, and what she can do to continue his work.

In the course of solving the mystery, Madelaine finds help in an unlikely companion: Simon, an Irish intelligence officer working in the Garda who has his own independent interest in the mystery of Madelaine’s deceased husband and his work in the middle east.

Through a series of clues and mysterious packages, we discover that Jim, Madelaine’s deceased spouse, was working in Turkmenistan at a school teaching young women to ride horses, but at the end of his life had stumbled into a human trafficking ring being run by members of the U.S. Military. Simon and Madelaine find evidence that Jim tried to intervene, and may have paid with his life.

Simon and Madelaine, with the help of many supporting characters, proceed to unravel mysteries, rescue girls, and stop crime across the globe, all the while finding a deeper relationship with each other. There are plenty of adventures and moments of suspense, some of which involve dangerous night rides on mysterious horses, suspicious circumstances at racetracks, and other such equine interlopers.

Because of the disturbing nature of the circumstances surrounding the young Turkmen girls, the book is probably not a great choice for young adult readers. The book may contain triggers for people sensitive to issues related to human trafficking.

Since we are Horse Nation, we appreciate the scenes involving the beautiful Akhal Teke horses and the richness they add to the story. There are also some adventurous trail riding scenes, and the inner bravery of Madelaine that obviously comes from a life of thinking like a horse woman. More ponies in the next book, please!

The book jumps right into the action, and has a nice pulse to it throughout that pushes you to the end. There are elements of the storytelling that feel heavy in logistics; lots of details about navigation or what people ate that don’t seem terribly relevant. On the other hand, the scenes in Turkmenistan feel somewhat blank of the much needed description of the feel, the atmosphere, the actual scene of the action.

The romantic element of the book is complex for me as a reader. It feels a little uncomfortable to root for Madelaine to find love while she’s still in mourning for her deceased husband, but I can’t help but find Simon to be terribly likable and charming. I’d have fallen in love with Simon if I were her, too, as he’s the best written character in the book, and dashing in every possible way.

Turkmen Captives is a fun little mystery novel with a little bit of everything, and a good beach book for an adult who likes a little more substance to their recreational reading and doesn’t mind a little dark subject matter.

Turkmen Captives is available in paperback and kindle formats on Amazon.