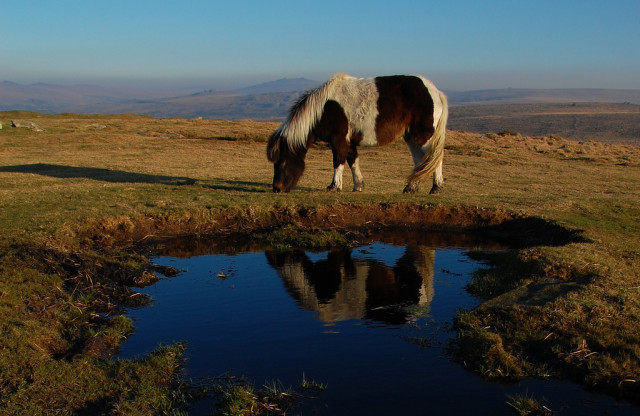 A group of well-intentioned but ill-informed hikers carried a foal for over an hour in Dartmoor when they believed it had been abandoned. The foal was bottle-raised for five days but ultimately died.

As reported by Horse & Hound, on May 27 a group of hikers out for a walk in the moorland of Dartmoor in Devon, England came upon a day-old foal who appeared to be alone. Concerned that the foal had either been abandoned or that something serious had happened to its mother, the hikers carried the foal for an hour, leaving him beside a distinctive hill and then continuing on to a nearby inn to get help.

The inn put the group in touch with Charlotte Faulkner, who operates the Friends of the Dartmoor Hill Pony website; Faulkner and her daughter, however, were unable to find the foal in the location described by the hikers. The foal was finally located just before dark and was then transported to Faulkner’s home in a car. At this point, the foal was quite dehydrated and was immediately bottle-fed.

Despite Faulkner’s care, as well as an unsuccessful two-day search for the foal’s dam, “Billy” died after five days.

This story parallels the recent headline in the United States in mid-May, when a pair of tourists in Wyoming’s Yellowstone National Park picked up a bison calf that they too believed had been abandoned, and placed it in their car. Efforts by park rangers to reintroduce the calf failed, and the animal needed to be euthanized. Yellowstone’s bison are wild animals; they are not a domesticated species.

The ponies living in a semi-feral state on Dartmoor are considered Dartmoor Hill Ponies, and cannot be registered as a purebred with the Dartmoor Pony Society. Several hundred weaned foals become available for purchase or adoption in the fall, with about 10% of those weanlings returning to the semi-feral herds, which are owned by the local farmers. The ponies are protected by law and allowed to free-range on Dartmoor, and it is illegal to feed them.

Faulkner of the Friends of the Dartmoor Hill Pony told Horse & Hound that this was the second recent incident of the public believing a foal had been abandoned. It’s important to note that horses, as compared to other species such as the white-tailed deer, do not typically “hide” their foals and forage, but keep their foals at their sides at all times. However, even if a feral foal seems to be abandoned, it’s critical that he not be handled or moved from the site at which he is found — this increases the chances of finding the foal’s mother and minimizes his risk of dehydration or injury while being moved.

The public at Dartmoor is being reminded not to touch the ponies or foals, and to notify the Dartmoor livestock protection officer if they are concerned about the well-being of a pony. The officer will then identify the pony and contact the farmer who owns it. While the public, including this group of hikers who moved Billy the foal, has good intentions of helping animals perceived to be in distress, the choice of action is often not in the animal’s best interest.

This sobering story reminds us that in a rapidly-changing world, the general public is growing further and further away from the kind of knowledge of livestock and animals that used to be common in the days in which a majority of our society might have been rural-based and involved in agriculture. The knowledge we take for granted in our life as equestrians is totally foreign to many members of the general public. While this kind of ignorance is mostly harmless, sometimes even amusing (“doesn’t your horse get cold in the pasture in the winter?”) it can also be dangerous (“that horse is hanging his head and looks sad, he might be abused”).

This heartbreaking story is a reminder that while we might love the exclusivity that naturally arises in the equestrian world, a sort of secret society we share only with other horse lovers, it’s also our duty to help educate animal lovers who might act out of the best of intentions. Perhaps this foal’s life could have been saved if these hikers had known just a little bit more.

[‘It was devastating’: death of foal ‘rescued’ by well-meaning walkers]