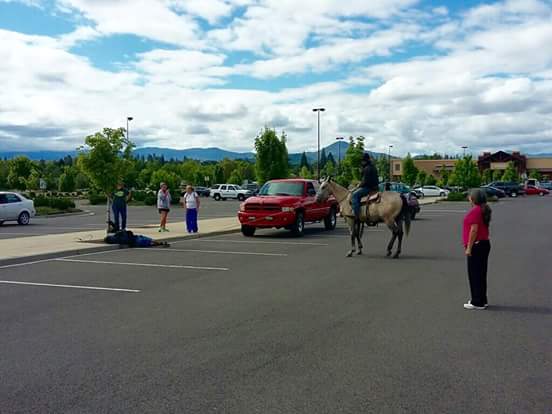 We could make a case for having a cowboy on duty at every major shopping center in America, really.

Oregonian rancher Robert Borba would probably argue that he was simply in the right place at the right time … and we’d add that he also had just the right set of tools and a quick-thinking mind, as well as what every good citizen needs — a great cowhorse.

Borba happened to be at the Wal-Mart in Eagle Point, Oregon last week to pick up dog food (with his rope horse in the trailer) when he heard someone shout that her bike was being stolen and for someone to stop the thief. When Borba realized this would-be thief was going to get away, he did what any good cowboy would do when a rebel breaks from the herd — grabbed his rope horse off the trailer and got to work.

Borba was able to throw a nice heel catch on the bicycle bandit and bring him to the ground, where he was able to hold him until law enforcement arrived.

This video via NBC News catches up with Borba in person:

We tip our hats to you here at Horse Nation, Robert Borba. The world needs more cowboys like you!