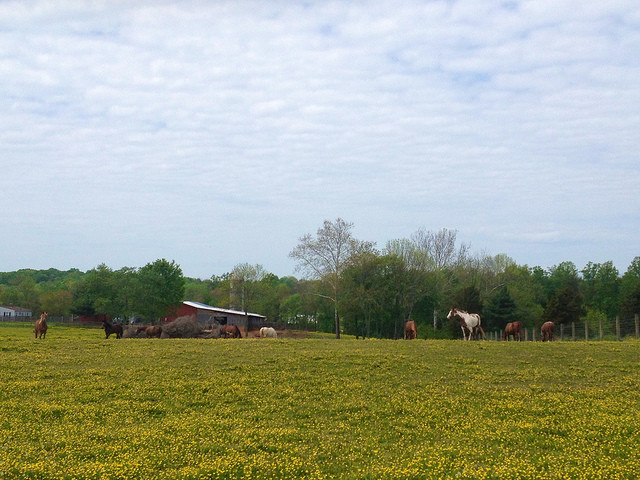 In a horrifying turn, a rescue responsible for taking in animals from a previous seizure at an equine sanctuary has just had 42 horses seized authorities in poor condition.

And that’s exactly the kind of twist that took place this week in King William County, Virginia, when 42 horses were seized from New Beginnings Horse Rescue. The owner, Cassy Newell-Reed, will appear in court on June 16 for arraignment; she was charged with three misdemeanor counts of animal cruelty. As of this moment, there do not appear to be any images available of the seized horses’ condition.

For the unlucky six animals seized yet again, their story begins in November of 2015 (though truly, their stories all begin much earlier). Peaceable Farm, both an equine sanctuary as well as a breeding farm, promised to house retired horses on grassy meadows where they could live out their days. However, by October of 2015, authorities were investigating reports of emaciated animals; farm owner Anne Goland surrendered 71 horses. Another 10 horses in immediate need of veterinary care were seized when Goland declined to surrender. Goland also faced embezzlement charges.

Due to the massive scale of this surrender/seizure, several rescue organizations took in these animals, with eleven horses going to New Beginnings Horse Rescue. Many horse rescuers networked to help track down the original owners of many of these horses, who had sent their animals to the sanctuary with the best of intentions. While some of the horses in the worst condition had to be euthanized, many were saved, reunited with former owners and were well on their way to recovery. For a moment, all seemed to be well.

But then this latest turn reminded us all that perhaps safety is only an illusion, that fate can change in the blink of an eye. Without information to know what really happened at New Beginnings, it’s difficult to speculate: did the rescue fall on hard times? Were there extenuating issues in the family? We may never know, but what we do know is that six of those original eleven horses who already endured so much at Peaceable Farm found themselves the subject of yet another seizure.

New Beginnings is a private rescue who does not give out tax-deductible receipts for donations, nor does it receive corporate or government funding. The rescue’s website states that the public is welcome to visit.

While it’s so easy to get emotional and point the fingers of blame at Peaceable Farm and then again at New Beginnings, horse rescues in Virginia are choosing to use this situation as an example of why horse rescues should answer to a governing body or be subject to more regulation so that heartbreaking stories like this one become a thing of the past.

The Global Federation of Animal Sanctuaries is one such governing body that registers and tracks animal rescues; the organization not only visits facilities but also looks into methods of care as well as financial plans and internal structure for sustainability.

[Woman who took in Orange horses charged with animal cruelty]