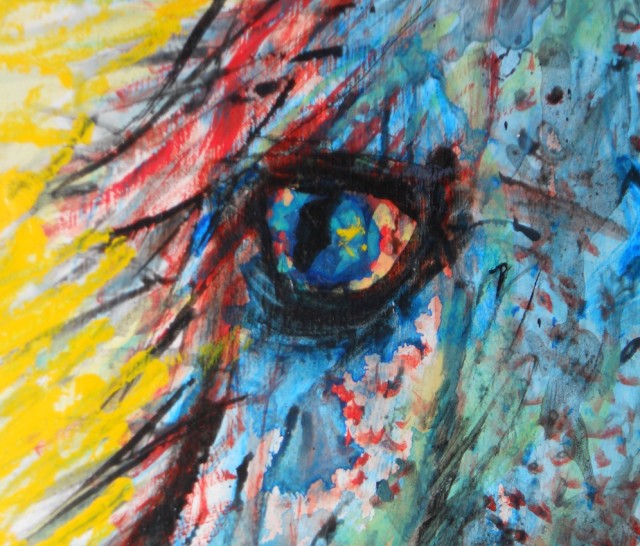 Candace Wade is following firsthand the rehabilitation of a rescued “Big Lick” Tennessee Walking Horse named Theo and reporting on his progress for Horse Nation. Theo is finding a new rhythm in his daily life.

Mental and physical healing takes the time it takes. This process does not adhere to dramatic arcs and riveting story progress. Theo the rescued “big lick”/performance Tennessee Walking Horse is doing his job. Theo is healing in small, yet still informative steps. The news that makes me smile is that Theo now has a painted portrait representation.

A portrait of Theo: what may come?

Artist Von Derry has captured the vigilant awareness that Theo’s eyes convey. Inferring his past from his mental and physical condition when he arrived at Ed’s farm, the eyes express the questioning of what he might have had to endure during his years as a show horse. The eyes express the silent watchful way Theo allowed the daily medical treatment of his bruised and broken feet and hooves. They capture how he focused, not sure, when Ed helped Theo to relax during gentle ground work. Those are the eyes that hid alarm the first time he was exposed to the new world of being outside in his own small paddock.

What grabs me is that those are the eyes that I see watching the sunshine on the field from his stall as Theo waits his turn to be turned out to his small grazing area. He still looks tacitly watchful, but now he is learning that “What May Come” will probably be satisfying for his horse’s mind and body and, most times, won’t hurt.

Black is not black. Theo’s coat seems black, but I see blues, purple and flashes of yellow when the sun hits it. Von’s vibrant color choices reflect the riot of color in an animal’s coat.

Von Derry’s work can be seen at The Red Pony restaurant and J.J.’s Wine Bar in Franklin, TN. A large portion of her paintings are exhibited at Salon Salon in Franklin.

Theo turned 14 in May. He has discovered Thompson seedless grapes and eats them like a gentleman.

Good news and “darn” news – a “horse-eating” cat strolling by his paddock scared the snot out him and Theo charged around his paddock, alarmed. Still building up muscle, this burst of activity caused some lameness. Ed is assured that this small setback is temporary.

Theo continues to exhibit pockets of fear. A thunderstorm rattled him so much one night that in the morning Ed found that he had rubbed the hair off on cheek of his rump in the corner of the stall. It seems he was coping by rubbing back and forth on the wall. We’ll see if it grows back.

The aftermath. Photo by Candace Wade.

More good news and cautious news – the toe of his worst hoof (front) is still growing out. The infection continues to dry. However, the sides are slow to catch up. It is possible that hindered circulation from his old shoes have slowed the recovery on the sides.

This continues to be of concern for fear of the toe cracking off. Careful, regular farrier care continues to try to assure that doesn’t happen.

Finally, Theo has learned to count. He has figured out in which order he is brought into the barn for the night. He continues to graze, seeming to ignore the others of his herd as Ed brings them in in a consistent order. Theo’s head pops up and he positions himself by his gate after the first two groups have filed past to be settled into their stalls.

Ed is pleased with this progress. It seems to mean that Theo is paying attention to routine. He is allowing himself to be part of that routine. He is accepting that he has a place in the herd.

Not boffo, “alert the media” news, but still important in the mental and physical recovery of a horse: Theo is doing his job. He is grazing and wandering and learning how to deal with life’s surprises. He is learning to relax into the life of a healthy horse. He is not assured that his feet will heal enough to sustain him, but he is growing healthier feet each month.

What may come for Theo? Ed still doesn’t know for sure, but for now Theo has a portrait and Thompson seedless grapes and sunshine and time to graze and a little less need to be wary every day.